The Mark XLIV (Mark 44), also known as Hulkbuster is an Extra Heavy-Duty Modular Armor[1] created by Tony Stark and Bruce Banner as a security safeguard in the event of an uncontrollable Hulk rampage. The armor works by attaching itself to the base armor of the Mark XLIII.

The armor was featured in Avengers 2: Age of Ultron, wherein it was used through Veronica's activation to subdue a rampaging Hulk in South Africa.[2]

Its design was completely based on the Hulkbuster Armor from the comic books, confirming that this is the same armor with the same name as the one from the comics. The Mark XLIV is extremely large in size. The armor has a dark red tone as its overall plating color, along with golden plates in various areas of its structure. It is covered with layered pieces of metal and has multiple Arc Reactors around its body.

The Hulkbuster is eleven feet high, which makes it the tallest armor to date. Its height is 3 feet taller than the Hulk. Aside from its height, it is also the heaviest armor existing in the MCU. The Hulkbuster is a Modular Armor wherein armor pieces are attached to a base armor making it much bigger.

The Mark XLIV has various systems.

the "Hulkbuster system" is very similar to the original mark XLIII, it does contain "J.A.R.V.I.S." software to help with its needs, as well "Veronica" which controls the airborne modular parts pod.

The armor is composed of a dense gold-titanium alloy.

Before the Death of Ultron

The Mark XLIV was created by Tony Stark and Bruce Banner as a backup plan in case the Hulk went on a rampage, so as to contain the monster as much as possible. Built together as part of the system of Veronica, the armor was designed as a modular armor add-on to the base armor of the Mark XLIII featuring various weapons, immense power, and combat capabilities. To ensure that it was capable to take down the Hulk, the armor's size was designed twice that of the Hulk's.

The armor was presumably tested and worked at various times by Stark and Banner before its ultimate perfection and completion.

After its creation, the armor's pieces were stored in Veronica's pod and placed inside one of Stark's Satellites for future use. From then on Veronica and the armor were never used, until the events of Age of Ultron in the near future.

After the Hulk was unleashed by Wanda Maximoff, he goes on a rampage along the nearby city. After destroying Ultron's initial prime body, Tony analyzes the Hulk's whereabouts and tracks him to the city. Realizing that he cannot stop the Hulk with the Mark XLIII, Tony calls and activates Veronica.[2]

After Veronica is activated, a modular pod is ejected from Stark's satellite and is sent down into South Africa. When the pod reached the Earth's atmosphere, various modular armor pieces and base Hulkbuster suit detached itself from the pod and flew towards Tony for the armor's attachment . The Mark XLIVs base began attaching onto the Mark XLIII in mid-air encasing it slowly, reinforcing it for the upcoming battle.

While Stark was undergoing his armor suit-up sequence, Veronica launched a specialized Hulk Cage to contain the Hulk for a short time while Tony finished his Suit-up. Although successful, the cage failed to contain the Hulk as he escaped and burrowed underground out of the trap.

By the time Hulk escaped, Tony's armor Suit-up was complete, and he initially tried to talk Bruce Banner out of the Hulk, but Tony made the mistake of mentioning Banner. The Hulk, filled with rage began to attack the armor and a chaotic battle ensued.

Battle Against the Hulk

The battle opened when the Hulk threw a nearby car at Iron Man and smashing through it pushing Hulkbuster back.. Stark engaged flight systems grabbing the Hulk by the neck and smashed him into the road beneath. The Hulk countered the Hulkbuster by kicking it into the stomach area making it crash-land. Stark quickly got back up and punched the Hulk while he was mid-air and blasted him with right arms repulsor sending him flying through wall and into a cargo truck. Hulkbuster flew to the point where the Hulk landed and armed its right arm's add-on Taser module, but the Hulk came from behind with a sign pole and hit the Hulkbuster to the back sending it flying into building. After bouncing off the wall Stark stabilized the armor engaging flight power near the ground until the Hulk jumped from behind and ran the sign pole straight through the left shoulder of the suit. on top of the suit the Hulk started breaking armor but Iron Man countered him by using the left arm rotating it 180 degrees and punching the Hulk. Once Iron Man got back up he stared detaching the damaged module, calling the Veronica by saying "Give me a hand". The parts container started deploying hydraulic repeater arm parts. Meanwhile the Hulk recovered and started a attack on the Hulkbuster while it was attaching a new arm, Iron Man slowed down the Hulk back using right arms repulsor during the meantime the new arm finished its attachment sequence and Stark used it to punch into the Hulk's right fist, creating a shockwave effect from the sheer power of the punches hitting each other. The Hulk tried to jump on the Hulkbuster again, but this time Stark used his momentum to slam him to the ground and activated the Hydraulic Micro-Repeater to put "Hulk" asleep. Instead the Hulk grabbed the fist and started crushing it. Iron Man used this chance to encage Hulk's arm and fly him away from the city, but Hulk started punching him off course making Stark crash inside a mall. He pushed the Hulk against a wall and activated the suit's sedative gas system to put him asleep, but instead Hulk pushed Hulkbuster back with both of his legs, crashing into elevator full of people. Stark grabbed it by the cables and held it until people got out. In the meantime Hulk tried attacking, but hulkbuster flip-kicked him smashing into the ground. Stark slammed the elevator he was holding onto the Hulk, which was followed by a right arm's punch which resulted in the Hulk spitting few of his teeth out, Stark apologised immediately. Afterwards the Hulk punched the Hulkbuster out of the mall, jumped on the stabilized Hulkbuster and started punching it. Stark threw the Hulk through a wall but he jumped back on the Hulkbuster, ripping off the back Arc Reactor pack. Iron Man called for a replacement pack, but Hulk hit it with a backside of his right arm, which sent the piece flying back and hitting the parts pod, forcing it to crash and presumably ending up destroyed. In the meantime Stark found a empty skyscraper construction site and used it for a "ride". Throwing the Hulk off the Hulkbuster launched 4 Missiles at the building while the suit itself was used to punch the Hulk down. In the Aftermath of the descent the Hulk saw soldiers with Assault rifles pointing at him, but before he could start attacking he was knocked out by the left Hulkbusters arm.

The Mark XLIV is a playable, and an unlockable armor in the game.

The Mark XLIV token is located at the Avengers Tower. When reaching to the top, there's is a token which is uncollectable, and is cornered with these ventilation systems. To unlock the Mark XLIV, you need to destroy these 8 ventilation systems, keep in mind, you only have 5.00 seconds to complete this procedure, but don't worry, each ventialion system will extend the time. Once destroyed 8 ventialion systems, the token is unlocked and your reward is given.

The battle ensues when Mandarin suddenly steals the Hulkbuster, and takes control. There are still remaining Killian's enemies yet, once there's no one left, the battle still keeps going, it's simple just shoot the Hulkbuster, certainly though, the Iron Legions arrive to finish off the Hulkbuster. Although, when at very low health, it will just like activate in Godmode. When these items destroyed, rebuilt it to a Shield Switcher, and aim. Once it is activated, an electromagnetic pulse charges, and releases an energy blast that shuts off the Hulkbuster's systems, then fire the laser to the golden cover back at the Hulkbuster. The battle is ended.

The cutscene shows that they have won, finishing the Mandarin. But still, shortly, the Hulkbuster explodes. Too sad..

The Mark XLIV is a playable armor in the game. The armor's first appearance is when the player deploys the hulkbuster, where as of Tony battles off against the Mind-controlled Hulk. 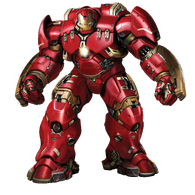 A take a look at the Hulkbuster 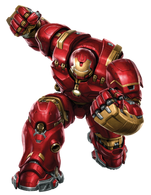 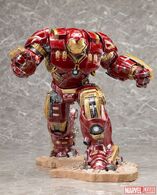 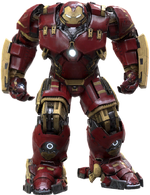