It was used and operated by Bruce Banner, to fight Thanos and the Black Order at the battle of Wakanda, while Tony Stark was off world. It defeated Cull Obsidian (one of the strongest members of the Black Order), and could fend off Thanos's invading forces, The Outriders. When Thanos did arrive, it was defeated by using the Infinity Gauntlet to fuse it into the side of a mountain, but was able to break out on its own (allegedly).

The capabilities and attributes of the Mark XLVIII are still very much unknown. To the point where some have questioned whether or not the original Mark XLIV Hulkbuster Mark I would be superior in design function and weaponry to 48. However, there are likely assumptions and factual prospects given to the Mark XLVIII on screen in Avengers Infinity War, which can still be qualified until proven other wise.

The RICS allows pilot to control the armor without being inside standard Iron Man Armor. This suggests the armor is separate armor unit and is not modular extension.

F.R.I.D.A.Y. , also known as Female Replacement Intelligent Digital Assistant Youth. is an artificial intelligence program likely capable of integrating into the armors systems to aid the pilot of the Mark XLVIII, as done with such other Iron Man Armor Models. F.R.I.D.A.Y. is capable of controlling the armor's weaponry and computer systems as well as summoning other armors to Tony Stark's command. The armor is also capable without the use of F.R.I.D.A.Y. as its own computer systems and user integration work as well.

The Mark XLVIII possesses and grants the user enhanced strength, speed and durability. This armor has been said to be designed and capable of taking on the Incredible Hulk and has fought against Cull Obsidian. Capable of leaping great distances in the air and (allegedly) breaking through portions of mountains. Its speed is also impressive able to keep pace with Cull Obsidianin combat as well as take on several Outriders, which are portrayed as carnivorous animal like beasts, though noted that enough of them have overwhelmed the Hulkbuster and got the better of it, before fellow Avenger Thor came to the rescue. Its durability is also useful, taking falls from great leaps, blows from Outriders, and some hits from Cull Obsidian, until he was capable of causing damage to the armor in close combat, taking it's arm.

The armor can also enter high speed flight, likely not as fast as other armor models due to it's bulk and heavy design for durability and strength, but flight systems none the less. Capable of heading from one side of the battle of Wakanda to another within minutes, to go to rescue fellow Avenger Vision. Not much is shown of its flight, but it is capable of being used as propulsion much as the other Iron Man armors do.

This armors weaponry is sadly not consistently shown. The only known weaponry it has shown of are revolved around basic Iron Man abilities. This standard set of tools include.

Repulsors: Standard Iron Man Armor weaponry; act as flight stabilizers, fire out of the palms of suit with concussive or lethal force. This variation of repulsors are red in color.

Unibeam: More powered version of the Repulsor; fired from the chest piece.

Missiles: Missiles in design similar to ones featured on Mark XLIV.

Sedative Gases and Sprays: Sleeping gas spraying system based in armor's gauntlets used for use against the Hulk in order to calm him down. 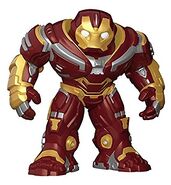 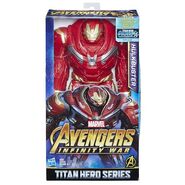 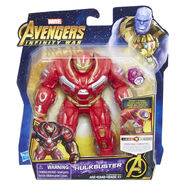 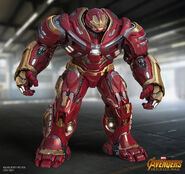 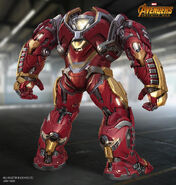 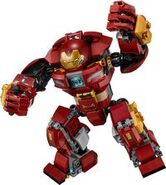 lego version
Add a photo to this gallery
Retrieved from "https://ironman.fandom.com/wiki/Mark_XLVIII_-_Hulkbuster_Mk_II?oldid=89675"
Community content is available under CC-BY-SA unless otherwise noted.