Tony: "You're right, we do need back up."
Rhodey: "Yeah, a bunch."
―Tony and Rhodey talking about the "House Party Protocol" suits, while waiting for them to show up.

The Mark XVIII (Mark 18), also known by its codename as "Casanova", is a Stealth Artillery Level RT Suit, and was one of several new Iron Man Armors created by Tony Stark as part of the Iron Legion. The armor was created sometime after the Battle of New York.

It was featured in Iron Man 3, and made its debut when Tony ordered J.A.R.V.I.S. to initiate the "House Party Protocol" in which it was activated to aid Tony in his battle against Aldrich Killian.

The suit earned its name "Casanova", because much like its predecessor, the Mark XVII, it has an oversized chest RT that can fire powerful blasts and can also generate a repulsor shield to protect itself, as well as a heavily advanced and improved "Cloaking System" that was based on the success of the Mark XVI's cloaking system.

After the successful and improved tests on the Mark XVI, the cloaking system was heavily modified to be compatible with combat, and thus the suit is able to carry weapons, as much as the usual Iron Man suit can do, and is suitable for heavy combat.

The Mark XVIII has a similar overall physique to the Mark XVII, with a darkened paint job and Mark XXII (Hot Rod)'s arms and legs. Along with the new stealth associated colors, this armor has a oversized chest RT.

The Mark XVIII has the ability use Stealth and cloak within its surrounding environment. Built to be able to use Heavy Firepower and have Stealth at the same time, this armor's Stealth ability is an improved version of the previous armors' Stealth ability.

Classified as a "Stealth Artillery Level RT Suit" the armor is specialized for intense firefights with the Central Unibeam Projector as the strongest weapon of the suit, it can fire much more Repulsor energy than its predecessors, the suit's weapons grants damage much more powerful than usual levels while featuring stronger electromagnetism for Repulsor-based armaments such as Repulsor Shields.

The Mark XVIII is also designed to withstand higher firepower and damage. It is increased and retrofitted with four extra vibranium platings to hold its RT Chest that support the Enlarged Central Unibeam Projector when it fires. The Mark XVIII is also supported with extra elemental armor platings throughout its body resulting in a bulkier yet tougher suit defense. Durability is also improved with the help of Repulsor Shields , Vibranium and Proto Adamantium plating. The suit's footwork and leg supports are fitted with extra plates giving it tactical advantage and strength through flight.

The Mark XVIII has powerful thrusters equipped on is back.

Its advanced cloaking system allows it to use pure stealth, which makes it entirely invisible to enemy warnings and allows it to completely blend in with its environmental surroundings. This feature allows it to go completely unseen and is suitable during stealth missions and heavy combat situations.

The suit retains its technological systems, that have been used in the previous Mark suits. Such as the suit's status system, its flight system, the navigation system controlled by J.A.R.V.I.S., and the anti-icing system, along with J.A.R.V.I.S. to control the suit and take place as its A.I. While the suit also features its new system, which is its specialty, the advanced cloaking system.

The Mark XVIII, just like its predecessor, the Mark XVI, features an advanced color camouflaging technology, which allows it to change its colors from black and silver to the classic red and gold.

The Mark XVIII, along with all the other newly built Mark suits, uses a more advanced technology that was based off on the Mark VII's technology, which is able to wrap itself around Tony's body, without the aid of robotic arms or any external mechanicals.

JARVIS OS: JARVIS is integrated into the armor.

The Mark XVIII has powerful Repulsors used for flight and for firepower.

A feature used from the Mark XVII, it also has a powerful Unibeam, that has a significantly lower output but higher energy consumption. This Unibeam can be fired in one devastating charge, or can feed multiple rapid fire beams, something which former armors did not have enough energy capacity for.

This armor is equipped with a minigun on each of its gauntlets just like the Mark XIII, Mark XXII and War Machine Armor Mark II/Iron Patriot.

Sometime after the events of The Avengers, Tony, who was haunted by what happened in New York, got obsessed in making more Iron Man suits. One of them was the Mark XVIII.

This time, he designed the Mark XVIII to specialize in both pure firepower and stealth, and created an oversized chest RT and a improved stealth system that was built within the suit's armor, for it to be able to fire extremely immense power and become undetected by enemy radar when used.

After creating the Mark XVIII suit, he kept it under his house in the place called the Hall of Armors, in where he kept all the other Mark suits that he had created one after the other except for the original 7 Mark Armors. After he was finished creating the Mark XVIII, he pursued to creating a prototype Hypervelocity suit, which was the Mark XIX, or otherwise known as the "Tiger".

When Tony's Malibu Mansion was raided, and later destroyed, the Mark XVIII along with the rest of the Iron Legion were still stored safely within the Hall of Armors Extension, as it was left undamaged during the attack. The chamber was still intact, completely sealed, and concealed from view.

This was part of Stark's plan, in which the Iron Legion was to be used later after he uncovered the truth behind the Mandarin and A.I.M.Activation of the "House Party Protocol"The Mark XVIII was activated by J.A.R.V.I.S. along with all the other armors in the basement of Tony Stark's Malibu Mansion, under the order of the House Party Protocol given out by Tony. It then flew out of the Hall of Armors and lead the way as it went towards the Roxxon Oil Rig together with all the other 34 armors.

When the Iron Legion arrived, it surrounded the area with the other armors and waited for Tony's commands. It can be seen hovering with the other armors in the background, as the Extremis Soldiers stand surprised with the arrival of the Iron Legion. When Tony orders J.A.R.V.I.S. to "Target Extremis heat signatures. Disable with extreme prejudice.", J.A.R.V.I.S. responds by saying "Yes sir!", which echoes out through all of the suits, including the Mark XVIII. The armor then starts targeting and attacking the Extremis Soldiers. It fights them off during the ongoing battle with help of the other armors. The armor was presumed to have fought and killed several extremis soldiers during the fight, as it was one of the last 21 armors left standing and succeeded in eliminating the remaining extremis forces with the help of the other Iron Legion armors. The Mark XVIII then resumes to flying around the oil rig in the aftermath of the battle.

The Mark XVIII was then detonated by J.A.R.V.I.S. for fireworks along with the other 20 armors, under the Tony's order of the "Clean Slate Protocol". This was to show Tony's devotion to his girlfriend, Pepper Potts. It was the 14th suit to detonate.

The Mark XVIII is an unlockable and playable armor in the game, that was released on December 27, 2013. It is one of the most powerful armors in the game, having a Score Multiplier of x8.5 as well as with its high Armor Statistics.

The Mark XVIII is one of the 42 unique and unlockable armors viewable through the Armor Gallery feature. 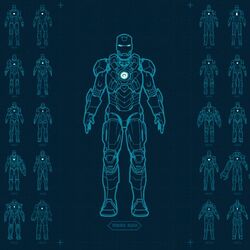 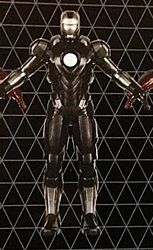 The Mark XVIII in full view. 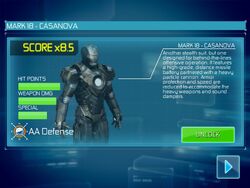 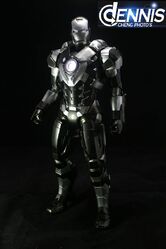 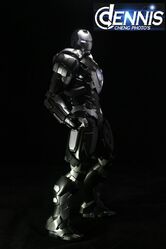 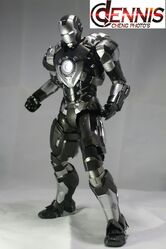 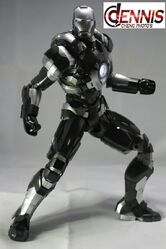 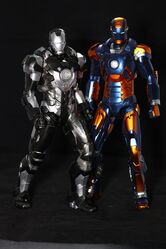 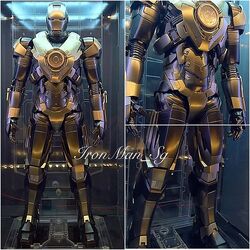 Retrieved from "https://ironman.fandom.com/wiki/Mark_XVIII_-_Cassanova?oldid=88429"
Community content is available under CC-BY-SA unless otherwise noted.