The Mark XVII (Mark 17), famously known by its name as the "Heartbreaker", is an Artillery Level RT Suit, and was one of several new Iron Man Armors created by Tony Stark as part of the Iron Legion. The armor was created sometime after the Battle of New York.[1]

The suit earned its name the "Heartbreaker", because it has an oversized chest RT, which can fire powerful blasts. The Mark XVII can fire narrow or wide beams and can also generate a Repulsor Shield for protection.

The Mark XVII has a red and gold color scheme, like most of its predecessors,  and the usual Iron Man suit. It has a bulkier but fit appearance, because of its thicker multiple-layered vibranium platings, and has an oversized chest repulsor RT built within the suit's armored chest area, which is its most unique and notable feature, and is also where its special abilities lie.

The suit has four titanium bar-like structures in the chest area, that are interlocked with the suit, which extend all the way to the shoulder plates and down to the back, then back to the chest area, through the sides of the upper abdomen area, which creates an x-like appearance that firmly holds the over-sized chest repulsor together, as well as providing more space for the Unibeam's size.

The suit's helmet and mask were based on the first designs of the one in the  Mark XI. The mask's appearance differs from all the other suits, as it has a more rough edged look and is not as smooth and sleek like a usual Iron Man suit does. It has four silver rectangular shaped platings on the whole mask, that extend all the way to the back, with two on each side of the mask's upper area, which are the railings that grant the mask the ability to slide up and down when activated by Tony at will.

All of the Mark XVII's notable features were later used among the many newly built suits created by Tony, and these features are only common with the Marks IX, XI, XVII, XVIII, XX, XXIV, XXVIII, XXIX, and XXXII. With the Mark XI having the first design on the mask, and the Mark XVII having the rest of the features present that were used in all the other Mark suits.

The suit, like its predecessors, retains the signature Repulsors, that were used in the previous Mark suits, as well as its Vibranium Powered Arc Reactor that powers the entire suit, while its Chest Repulsor was specially modified for the suit's functionality.

Classified as an "Artillery Level RT Suit" the armor is specialized for intensive firefights with the Central Unibeam Projector as the strongest weapon of the suit, it can fire much more Repulsor energy than its predecessors, the suit's weaponry grants damage much more powerful than usual levels while featuring stronger electromagnetism for Repulsor-based armaments such as Repulsor Shields.

The Mark XVII is also designed to withstand higher firepower and damage. It is increased and retrofitted with four extra vibranium platings to hold its RT Chest that support the Enlarged Central Unibeam Projector when it fires. The Mark XVII is also supported with extra elemental armor platings throughout its body resulting in a bulkier yet tougher suit defense. Durability is also improved with the help of Repulsor Shields , Vibranium and Titanium plating. The suit's footwork and leg supports are fitted with extra plates giving it tactical advantage and strength through flight.

The Mark XVII has powerful Thrusters equipped to its back. Used as a secondary propulsion when flying, it uses the same standard Repulsion system used for the standard flight stabilizers.

The "Heartbreaker" features an enhancement unique to its predecessors, it features an extremely enlarged and increased RT Core Unit being able to fire an enormous and much tactful Unibeam Blast than other armors preceding Mark XVII.

The Mark XVII, along with all the other newly built Mark suits, uses a more advanced technology that was based off on the Mark VII's technology, which is able to wrap itself around Tony's body, without the aid of robotic arms or any external mechanicals.

The Mark XVII has an over-sized Unibeam attached to the center of its chest piece. It is held firmly by four metal bars that connect it around the suit's upper abdomen area. It is powered by a gift from Odin, the Tesseract, and can fire extremely immense power when used. It also can fire shields, and control its power.

The Mark 17 has an over-sized Unibeam attached to the center of it's chest piece. It is held firmly by four metal bars that connect it around the suit's upper abdomen area. It is powered by the new and improved Arc Reactor, and can fire extremely immense power when used.

Sometime after the Battle of New York, Tony, who was haunted by what happened in New York, got obsessed in making more Iron Man suits. One of them was the Mark XVII.

This time, he designed the Mark XVII to specialize in pure firepower, and created an oversized chest RT that was built within the suit's armor, for it to be able to fire extremely immense power when used.

When Tony's Malibu Mansion was raided, and later destroyed, the Mark XVII along with the rest of the Iron Legion were still stored safely within the Hall of Armors Extension, as it was left undamaged during the attack. The chamber was still intact, completely sealed, and concealed from view.

The Mark XVII was activated by J.A.R.V.I.S. along with all the other armors in the basement of Tony Stark's Malibu Mansion, under the order of the House Party Protocol given out by Tony. It then flew out of the Hall of Armors and lead the way as it went towards the Roxxon Oil Rig together with all the other 35 armors.

When the Iron Legion arrived, it was the first armor to appear in the scene, and was one of the seven armors that formed the line the Iron Legion's entrance, along with the Mark XXXIX, Mark XL, Mark XXXV, Mark XXXIII, Mark XV, and Mark XXVII.

When Tony orders J.A.R.V.I.S. to "Target Extremis heat signatures. Disable with extreme prejudice.", J.A.R.V.I.S. responds by saying "Yes sir!", which echoes out through all of the suits, including the Mark 17.

The armor then started targeting and attacking the Extremis Soldiers in the Rig, and fought off some soldiers with the help of the other armors during the ongoing battle. When the Mark XXXV was being overwhelmed by soldiers, Tony ordered Heartbreaker to help out Red Snapper.

The Mark XVII flew alongside the Mark XXXV and blasted off the Extremis Soldiers hanging on it. It succeeded blasting off two of them, but as the Mark XXXV became unstable, and gave no room for the Mark XVII to get a clear shot at the last one.

Another soldier from the armor jumped on the Mark XVII after but killed it, just before the last soldier was that was still hanging on redsnapper ripped out the armor's facemask, and the armor crashed into a crate, destroying it and killing the one soldier with it.

With the Mark XXXV destroyed, the Mark XVII continued battling the Extremis Soldiers. It was later on controlled by JARVIS and landed on the platform where Rhodey was in. With J.A.R.V.I.S. speaking through the armor to Rhodey, the Mark XVII took Rhodey and gave him a lift.

As the armor flew up an Extremis Soldier jumped on it. The Mark XVII rolled over in an attempt to shake off the soldier. This caused Rhodey to fall down instead, and the Mark XVII flew off with the soldier still on its back. The Mark XVII made another split second appearance when Rhodey was attempting to save the president.

The armor was presumed to have fought and killed several extremis soldiers during the fight, as it was one of the last 21 armors left standing and succeeded in eliminating the remaining extremis forces with the help of the other Iron Legion armors. The Mark XVII then resumes to flying around the oil rig in the aftermath of the battle.

The Mark XVII was then detonated by J.A.R.V.I.S. for fireworks along with the other 20 armors, under the Tony's order of the "Clean Slate Protocol". This was to show Tony's devotion to his girlfriend, Pepper Potts. It was the 4th suit to detonate.

A heavily armored suit with extra firepower, this armor is perfect against enemies that need something extra to bring them down.

The Mark XVII - Heartbreaker is a playable and unlockable armor that was available as one of the initial armors during the release of the game. It is categorized under the Frost Charge special power, and is the third weakest armor with this special power.It's also the 11th weakest armor in the game. 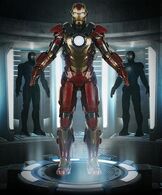 The Mark XVII, in full view, as seen in the Iron Man 3 movie theatrical poster.

The Mark XVII's most notable feature, which is its oversized Chest Repulsor RT, which is showing brightly. 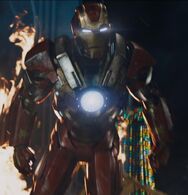 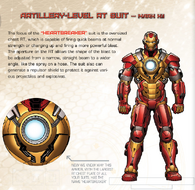 Retrieved from "https://ironman.fandom.com/wiki/Mark_XVII_-_Heartbreaker?oldid=88663"
Community content is available under CC-BY-SA unless otherwise noted.