The Mark XXII (Mark 22), also known by its name as "Hotrod", is a War Machine 2.0 Prototype Suit, and was one of several new Iron Man Armors created by Tony Stark as part of the Iron Legion. The armor was created sometime after the Battle of New York.[1]

The was named "Hotrod" for it's similar color design, and resemblance to Stark's Hotrod Car featuring a unique custom flame design on the armors gauntlets' and boots' plates.

Hotrod was made to have the same protection as the first War Machine armor, but with 1/3 of the weight.

This suit was a non-weaponized prototype of the War Machine Mark II armor. However, it did have the signature repulsors and a micro-cannons on each of its gauntlets. It featured dark plating on the torso and helmet, but sported crimson and orange flames on the appendages.

Succeeding its predecessor in a lot of aspects, the armor has very high versatility. Lighter in weight than the Original War Machine Armor, the Mark XXII can do various abilities that the previous armor could not. Able to dodge objects, fly faster and move swifter; its versatility is its only special capability, while the rest of its features use the same design and technology from the new advanced suits of the Iron Legion.

The Mark XXII has powerful repulsor-propelled thrusters on its back. This armor features the latest thruster design.

The Mark XXII, along with all the other newly built Mark suits, uses a more advanced technology that was based off on the Mark VII's technology, which is able to wrap itself around Tony's body, without the aid of robotic arms or any external mechanicals.

The Mark XXII has standard based Repulsor technology.

The Mark XXII has a horizontal rectangular shaped Unibeam, with a bright whitish blue glowing light from the Vibranium Arc Reactor Mark II core it is powered from.

This armor is equipped with a belt fed micro-cannon (Presumably 20mm caliber) on each of its gauntlets.

With Sneaky's completion, Stark proceeded to create a new type of suit with special anti-heat features, the Mark XXIII, also known as "Shades".

When Tony's Malibu Mansion was raided, and later destroyed, the Mark XXII along with the rest of the Iron Legion were still stored safely within the Hall of Armors Chamber, as it was left undamaged during the attack. The chamber was still intact, completely sealed, and concealed from view.

The Mark XXII was activated by J.A.R.V.I.S. in the basement of Tony's Malibu Mansion, under the order of the House Party Protocol issued by Tony. It then flew out of the Hall of Armors and went towards the Roxxon Oil Rig, together with the other 35 armors.

After, Tony orders JARVIS to "Target all Extremis heat signatures. Disable with extreme prejudice.", which JARVIS replies to with "Yes sir!", which echoes out through all of the suits, including the Mark XXII.

The armor then started targeting and attacking the Extremis Soldiers in the rig, and fights them off with the help of the other armors during the ongoing battle. In the midst of the battle, it can be briefly see blasting and fighting soldiers on the backgroune. The armor is later controlled by JARVIS to aid Tony in his rescue for Pepper.

The suit flew up to the platform of Tony's location, and just as Tony was about to jump into the suit, an Extremis Soldier vaulted a yellow metal pole from one of the oil rig's rails, straight through it. Thus destroying it as it was nailed on one of the base stands of the oil rig, while many parts of the suit broke off.

The Mark XXII is a playable armor that was released on the second update of the game. It is the second strongest armor categorized under the Frost Charge special power, with the first being the Mark XXXIII.

WAR MACHINE ARMOR PRELIMINARY REDESIGN, BUILT FOR SPEED AND AGILITY. FEATURING THE LATEST THRUSTER DESIGN, WITH THE SAME PROTECTION, BUT AT 1/3 THE WEIGHT.

The Mark XXII, also known as the "Hotrod", a War Machine 2.0 Prototype Suit. 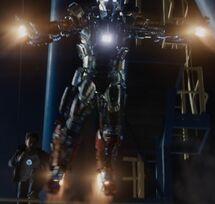 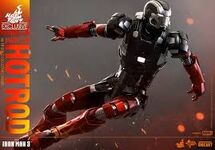 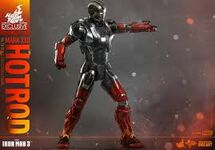 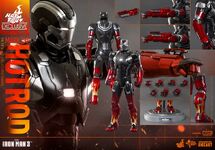 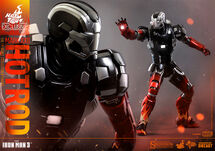 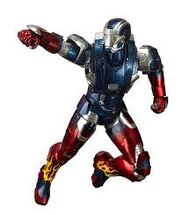 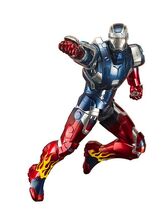 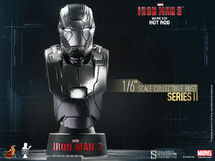 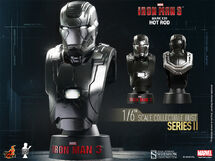 Retrieved from "https://ironman.fandom.com/wiki/Mark_XXII_-_Hotrod?oldid=89647"
Community content is available under CC-BY-SA unless otherwise noted.