The Mark XXIV (Mark 24), also known by its name as "Tank", is a Heavy Combat Suit, and was one of several new Iron Man Armors created by Tony Stark as part of the Iron Legion. The armor was created sometime after the Battle of New York.

The suit earned it's name the "Tank", for being able to withstand heavy damage in combat, and just like the Mark XVII, has an over-sized Chest Repulsor RT, that fires powerful blasts on it's enemies and can also generate a powerful Repulsor Shield for protection.

The Mark XXIV has brown and light gold plates in its overall armor design. It has an enlarged chest piece, as well as a rough-edged helmet, much like the Mark XVII and Mark XI's design. It was just a redesigned version of the Mark XVII with more features.

Since it is a Heavy Combat Suit, the Mark XXIV has increased Armor Durability. Built to withstand powerful attacks from enemies, it's armor can handle twice the damage of a regular Iron Man Armor, making it one of the strongest and most reliable armors among all of Tony's armors. It has a combination of Gold-Titanium and Kevlar reinforced armor plating.

Built to handle powerful combat, the Mark XXIV is equipped with a variety of weapons that it can use during battle. Its main weapons, which are the armor's Repulsors and Unibeam, have the most powerful attack damage when used.

The Mark XXIV has powerful Thrusters equipped on it's back with the standard Repulsion system.

The Mark XXIV, along with all the other newly built Mark suits, uses a more advanced technology that was based off on the Mark VII's technology, which is able to wrap itself around Tony's body, without the aid of robotic arms or any external mechanics.

The Mark XXIV has the standard type of Repulsors, only it is more powerful, which makes the armor excellent for use in combat.

The Mark XXIV has an enlarged Unibeam and chest piece much like the Mark XVII, but slightly smaller in size. It's Unibeam is circular and is surrounded by light brown plating along with four bars connected to it. The bars form an x-shape that firmly hold the chest piece to the armor, completely interlocking it with the suit.

Being a Heavy Combat Suit, the armor's Unibeam is presumed to have a powerful energy output. Capable of firing an immense amount of power, it's Unibeam is second only to the Mark XVII's original piece.

Other Weapons: It is safe to assume that Mark XXIV has the same weapon systems previously seen on earlier Iron Man armors. These weapons may include rockets, lasers, mini guns, sonic repulsors, battle blades, or an electric field.

Sometime after the Battle of New York, Tony, who was haunted by what happened in New York, got obsessed in making more Iron Man suits. One of them was the Mark XXIV.

With Tank's completion, Stark proceeded to create a new type of suit for construction purposes, the Mark XXV, also known as "Striker".

When Tony's Malibu Mansion was raided, and later destroyed, the Mark XXIV along with the rest of the Iron Legion were still stored safely within the Hall of Armors Extension, as it was left undamaged during the attack. The chamber was still intact, completely sealed, and concealed from view.

The Mark XXIV was activated by J.A.R.V.I.S. along with all the other armors in the basement of Tony's Malibu Mansion, under the order of the "House Party Protocol" issued by Tony. It then flew out of the Hall of Armors and went towards the Roxxon Oil Rig together with the other 35 armors.

When the Iron Legion arrived, the Mark XXIV followed as the armors slowly surrounded the rig. With the armors forming a line, it flew beside the Mark XIX and Mark XXIII. As the armors completed surrounding the rig, it can be briefly seen hovering with the other armors, waiting for Tony's commands as the Extremis Soldiers stand surprised with the arrival of the Iron Legion.

When Tony orders J.A.R.V.I.S. to "Target all Extremis heat signatures. Disable with extreme prejudice.", JARVIS' replies with "Yes sir!", which echoes throughout all of the armors, including the Mark XXIV.

The armor then targets the Extremis Soldiers, and proceeds to attack them after. It fights them off in the rig with the help of the armors during the battle. In the midst of the battle, the Mark XXIV is briefly seen as it blasts two Extremis Soldiers in the air, after they were tossed and hit by the Mark XXV's Pneumatic Hammers. The Mark XXIV never makes any other appearances after this point.

The armor was presumed to have fought and killed several extremis soldiers during the fight, as it was one of the last 21 armors left standing and succeeded in eliminating the remaining extremis forces with the help of the other Iron Legion armors. The Mark XXIV then resumes to flying around the oil rig in the aftermath of the battle.

The Mark XXIV was then detonated by J.A.R.V.I.S. for fireworks along with the other 20 armors, under the Tony's order of the "Clean Slate Protocol". This was to show Tony's devotion to his girlfriend, Pepper Potts. It was the third suit to detonate.

The Mark XXIV is a limited edition armor that became available in the game on December 1, 2013 and ended its run on December 13, 2013. It is one of the Special Offer Armors, and has the Proton Shield special power. When it was still available, it was the weakest armor with the Proton Shield special power and was the 16th strongest armor in the game. 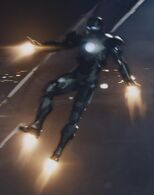 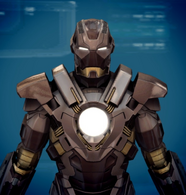 Retrieved from "https://ironman.fandom.com/wiki/Mark_XXIV_-_Tank?oldid=88434"
Community content is available under CC-BY-SA unless otherwise noted.