Tony Stark: "You're right, we need back up."
Rhodey: "Yeah, a bunch."
―Tony and Rhodey talking about the "House Party Protocol" suits, while waiting for them to show up.

The Mark XXVIII (Mark 28), also known by its name as "Jack", is a Radiation-Zone Suit, and was one of several new Iron Man Armors created by Tony Stark as part of the Iron Legion. The armor was created sometime after the Battle of New York.

It was featured in Iron Man 3, and made it's debut when Tony ordered J.A.R.V.I.S. to initiate the "House Party Protocol", in which it was activated along with all the other suits to aid Tony in his battle against Aldrich Killian.

The Mark XXVIII's design is based but with a slight resembles to the mark VII almost completely on the Mark XI's, with only its unique color scheme, its knees, and the capabilities of the armor being different. The Mark XXVIII seems to resemble the color scheme of a Radiation Hazard Symbol, and uses the orange color type instead of the yellow. The color design most likely indicates that it can withstand extreme amounts of radiation, as well as serve as a warning for radiation.

It's faceplate has a symbol on it resembling a hazmat symbol. The suit is notable to be heavier than other suits as it is fully sealed to protect from radiation and has a NBC (Nuclear-Biological Chemical) protection system to further assist the user in hazardous enviroments. Another reason the suit is heavier than other suits is becasuse it uses more gold than previous models to help protect it from extreme radiation.

The Mark XXVIII has a very unique ability to repel radiation from the armor's surface and protect the user inside it. Shared with the Mark XXVI, Mark XXXIX, Mark XLII and this armor, the Mark XXVIII can withstand extreme amounts of radiation and not get damaged, or affect the person inside using it.

The Mark XXVIII has Thrusters equipped to it's back. The suit's footwork and leg supports are fitted with extra plates giving it tactical advantage and strength through flight.

The Mark XXVIII, along with all the other newly built Mark suits, uses a more advanced technology that was based off on the Mark VII's technology, which is able to wrap itself around Tony's body, without the aid of robotic arms or any external mechanicals.

The Mark XXVIII has standard based Repulsors.

The Mark XXVIII has a standard, but small circular-shaped Unibeam.

Sometime after the Battle of New York, Tony, who was haunted by what happened in New York, got obsessed in making more Iron Man suits. One of them was the Mark XXVIII.

The Mark XXVIII was activated by J.A.R.V.I.S. along with all the other armors in the basement of Tony's Malibu Mansion, under the order of the "House Party Protocol" issued by Tony. It then flew out of the Hall of Armors and went towards the Roxxon Oil Rig together with the other 35 armors.

When Tony orders J.A.R.V.I.S. to "Target all Extremis heat signatures. Disable with extreme prejudice.", J.A.R.V.I.S. replies with "Yes sir!", which echoes throughout all the suits, including the Mark XXVIII.

The armor then targets and attacks the Extremis Soldiers, and fights them off with the help of the other armors during the ongoing battle. Before Tony asked Jarvis to get Igor to steady the oil rig, the Mark XXVIII could be briefly seen blasting an Extremis soldier.

The armor makes another split second appearance when Rhodey is attempting to save the president. The armor was presumed to have fought and killed several extremis soldiers during the fight, as it was one of the last 21 armors left standing and succeeded in eliminating the remaining extremis forces with the help of the other Iron Legion armors. The Mark XXVIII then resumes to flying around the oil rig in the aftermath of the battle.

The Mark XXVIII was then detonated by J.A.R.V.I.S. for fireworks along with the other 20 armors, under the Tony's order of the "Clean Slate Protocol". This was to show Tony's devotion to his girlfriend, Pepper Potts. It was the 9th suit to detonate.

Mark XXVIII - Jack is a Limited Edition armor that was released on December 19, 2013. It is categorized under the Special Offer section, and has the Proton Field Special Power. When it was still available, the Mark XXVIII was the 3rd strongest armor with the Proton Field Special Power and was the 8th strongest armor in the game. 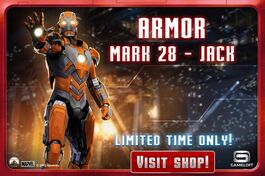 The Mark XXVIII's release poster in the game.

The full view of the Mark XXVIII in the game.

RADIATION PROTECTION SUIT WITH A DOUBLE WALLED ALLOY ARMOR TO PROTECT THE USER FROM VARYING TYPES AND LEVELS OF RADIATION.

The Mark XXVIII, also known as "Jack", a Radiation-Zone Suit. 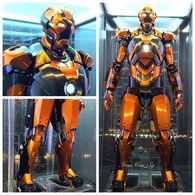 Retrieved from "https://ironman.fandom.com/wiki/Mark_XXVIII_-_Jack?oldid=88437"
Community content is available under CC-BY-SA unless otherwise noted.