Black With Green and Silver Plates

The Mark XXVI (Mark 26), also known by its codename as "Gamma", is a Gamma Radiation Suit, and was one of several new Iron Man Armors created by Tony Stark as part of the Iron Legion. The armor was created sometime after the Battle of New York.[1]

It was featured in Iron Man 3, making its debut when Tony ordered J.A.R.V.I.S. to initiate the "House Party Protocol", in which it was activated along with all the other suits to aid Tony in his battle against Aldrich Killian.

The suit earned its name "Gamma" for being able to withstand extreme heat and temperatures as well as very powerful and devastating electrical surges. Its specially built armor is also known to make it withstand gamma radiation, and this is where its name is derived from. It was built for heavier construction and was based out of the Mark 25's design. It can also be used in dangerous situations.

This armor's design is almost an exact copy of the Mark XXV's design. Its body armor, as well as its unique jack-hammer like arms feature, is almost identical to the Mark XXV's. With only the exception of the recolored platings, and the upper-middle portion of the face mask, widened approximately by an inch.

The armor also has a very unique feature that cannot be found in previous armors, and just like the Mark XXV, has a different colored Arc Reactor, which is a glowing White, and this also goes for its eye color as well.

Its color scheme is dark green and black with some silver platings in a few areas. The dark green colors are located in various platings on the armor. One is on both of its jackhammer-like arms screwed-like platings. Another upper-middle portion of its helmet, and the rest are on various areas in its body armor and its leg platings.

The black and silver colors cover up most of the armor on the areas where mostly its defense systems lies, as well as very important or special components, which includes all the armors limb joints, and openings.

Using the armor's powerful Pneumatic Hammers, the Mark XXVI is able to create intense power within its Hammers to be able to crush hard objects or debris.

The Mark XXVI can resist gamma radiation, which is where its name is derived from. It can also resist extreme heat and temperatures, as well as powerful and devastating electrical surges.

The Hammer's functionality works the same as it's predecessor, and is similar to the way a jackhammer works. The Hammer can crush very hard objects or debris with sheer force and power and can be lethal to enemies as well when used as a weapon.

The Mark XXVI, along with all the other newly built Mark suits, uses a more advanced technology that was based off on the Mark VII's technology, which is able to wrap itself around Tony's body, without the aid of robotic arms or any external mechanicals.

It can flexibly open itself to allow Tony to enter into the suit and automatically wrap itself around him, anywhere at any time, much like the Mark XLII's technology and the other newly built Mark suits.

The Mark XXVI has standard based Repulsor technology.

The Mark XXVI has two Pneumatic Hammers, with one on equipped on each arm. Although not considered a weapon, they can still be lethal when used.

Sometime after the Battle of New York, Tony, who was haunted by what happened in New York, got obsessed in making more Iron Man suits. One of them was the Mark XXVI. He built the Mark XXVI as an upgrade to the Mark XXV.

With Striker's completion, Stark proceeded to work his next armor, which resulted in the creation of the Mark XXVII / Disco.

When Tony's Malibu Mansion was raided, and later destroyed, the Mark XXVI along with the rest of the Iron Legion were still stored safely within the Hall of Armors Chamber, as it was left undamaged during the attack. The chamber was still intact, completely sealed, and concealed from view.

The Mark XXVI was activated by J.A.R.V.I.S. along with all the other armors in the basement of Tony's Malibu Mansion, under the order of the House Party Protocol issued by Tony. It then flew out of the Hall of Armors and went towards the Roxxon Oil Rig together with the other 35 armors.

When Tony gives J.A.R.V.I.S. the order to "Target all Extremis heat signatures. Disable with extreme prejudice.", J.A.R.V.I.S. replies with "Yes sir!", which echoes throughout all the armors, including the Mark XXVI.

The armor then starts targeting and attacking the Extremis Soldiers in the area, and fights them off with the help of the other armors during the ongoing battle. The armor was presumed to have fought and killed several Extremis soldiers during the fight, as it was one of the last 21 armors left standing and succeeded in eliminating the remaining Extremis forces with the help of the other Iron Legion armors. The Mark XXVI then resumes flying around the oil rig in the aftermath of the battle.

The Mark XXVI was then detonated by J.A.R.V.I.S. for fireworks along with the other 20 armors, under Tony's order of the "Clean Slate Protocol". This was to show Tony's devotion to his girlfriend, Pepper Potts. It was one of the last suits to detonate. 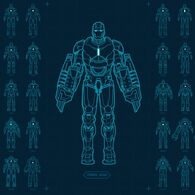 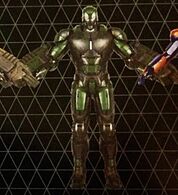 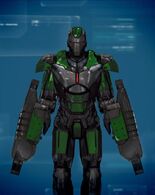 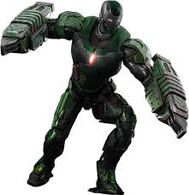 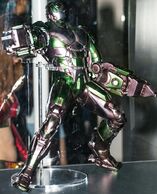 Mark 26 on the Marvel Wiki.

Mark 26 on the Marvel Movies Wiki.
Retrieved from "https://ironman.fandom.com/wiki/Mark_XXVI_-_Gamma?oldid=88436"
Community content is available under CC-BY-SA unless otherwise noted.