The Mark XXV (Mark 25), also known by its code-name as "Striker" or "Thumper", is a Heavy Construction Suit, and was one of several new Iron Man Armors created by Tony Stark as part of the Iron Legion. The armor was created sometime after the Battle of New York.[1]

It was featured in Iron Man 3, and made it's debut when Tony ordered J.A.R.V.I.S. to initiate the "House Party Protocol", in which it was activated along with all the other suits to aid Tony in his battle against Aldrich Killian and his Extremis enhanced soldiers.

The suit earned it's name the "Striker", because of it's powerful jackhammer like hands that can pulverize concrete. It was built for helping in heavy construction and specializes in raw power. It can also withstand temperatures and electrical surges. It is the first suit to have a green colored Arc Reactor instead of the classic blue, a feature that is unique with the suit.

The armor has a black and gold color scheme. It's design is unique compared to the other armors. It has two jackhammer-like hands that are colored yellow, which makes it the most notable feature as well as the only part of the armor's design that features a yellow color.

Apart from the jackhammer-like hands, it has a thin rectangular shaped Arc Reactor, with a glowing green color that represents it's energy type. This features also goes with it's eyes, having the same color.

Using the armor's powerful Pneumatic Hammers, the Mark XXV is able to create intense power within it's Hammers to be able to crush hard objects or debris.

The Mark XXV has two Pneumatic Hammers, with one equipped on each arm. They are the suit's notable and main features. The Pneumatic Hammers are used to crush debris and objects and were designed specifically for construction. A single Pneumatic Hammer features immense power when used and has a similar functionality to that of a Jackhammer.

The Mark XXV, along with all the other newly built Mark suits, uses a more advanced technology that was based off on the Mark VII's technology, which is able to wrap itself around Tony's body without the aid of robotic arms or any external mechanics.

It is a suit with augmented strength designed for manipulating extremely heavy objects.

The Mark XXV has standard based Repulsor technology.

The Mark XXV has a thin vertical, rectangular-shaped Unibeam in its chest piece.

Although not considered as a weapon, the Mark XXV has two powerful Pneumatic Hammers that can still be lethal when used. Both are colored with yellow plates, and have black-lined stripes on them which serves as a symbol for a Construction Warning.

The Pneumatic Hammer's functionality is similar to the regular mechanism of a jackhammer. When activated, the hammers will retract and can be done repeatedly to destroy debris. The hammer's metal blade can expand to allow room for more crushing of debris.

Because of this, Stark began working on the Iron Legion, and through its development, created several Iron Man Armors, which were the Mark's VIII-XXIV all with various designs and purposes. After the Mark XXIV / Tank's completion, Stark proceeded to working on his next armor, the all-new Mark XXV.

Stark created the Mark XXV as a Construction Suit, designing it with two Pneumatic Hammer's attached to each arm. The armor specializes in augmenting strength from the power of its Pneumatic Hammer's and is capable of inflicting severe damage to structures and buildings. Tony also gave the name "Striker" to the suit, from the way the armor's hammers deliver a striking blow at it's targets.

With Striker's completion, Stark proceeded to work on an improved version of the armor, creating it's successor, the Mark XXVI / Gamma.

When Tony's Malibu Mansion was raided, and later destroyed, the Mark XXV along with the rest of the Iron Legion were still stored safely within the Hall of Armors Chamber, as it was left undamaged during the attack. The chamber was still intact, completely sealed, and concealed from view.

The Mark XXV was activated by J.A.R.V.I.S. along with all the other armors in the basement of Tony's Malibu Mansion, under the order of the House Party Protocol issued by Tony. It then flew towards the Roxxon Oil Rig after together with the other 35 armors.

When the Iron Legion arrived at the scene, the Mark XXV surrounded the area along with all the other suits. It then targeted and attacked the Extremis Soldiers in the rig after Tony gave JARVIS the order to "Target all Extremis heat signatures. Disable with extreme prejudice." The Mark XXV, controlled by JARVIS battled a lot of Soldiers together with the help of the other armors.

It continued battling the Extremis Soldiers after. The armor was presumed to have fought and killed several extremis soldiers during the fight, as it was one of the last 21 armors left standing and succeeded in eliminating the remaining extremis forces with the help of the other Iron Legion armors. The Mark XXV then resumes to flying around the oil rig in the aftermath of the battle.

The Mark XXV was then detonated by J.A.R.V.I.S. for fireworks along with the other 20 armors, under the Tony's order of the "Clean Slate Protocol". This was to show Tony's devotion to his girlfriend, Pepper Potts. It was one of the last suits to detonate.

The Mark XXV is a playable, and an unlockable armor in the game. To unlock the Mark XXV, while at the surface, head over to the Helicarrier and lead to the Helicarrier's control room, and then head over to the Left Entrace, then you're experiencing a corridor. Need a hint?, The Laboratory is on the left. Then, you see a Doctor Scientist experiencing problems about The Cradle.

The Doctor Scientist explains that they have delighted about the Doctor Cho's cradle technology succeeded making the process of an entire being. Turns out it's a lack of success and compromised during the process. To do this, she advises the player to turn it off and on again.

To do this procedure, pull the lever, and then you need a character that fires an electric beam. If you selected one then fire it. Once fully charged, the right controller is enabled, while activating it, you can see 4 shapes, the picture is on the right side means that you need to do the correct shape that was indicating at the picture. Once it is cracked, the left controller is unlocked.

Now the left one displays a Lego human figure, to do this, it is simple like you make a lego formation of it, set the dismantled pieces on it, creating a Lego figure. Once it is constructed, it is like start to loading, as the body was sent to The Cradle, the player successfully creates an entire being. Gladly, after The Cradle is back online. You have a reward: Mark XXV!

When selecting The Mark XXV in the HUD, a taunt will play that Tony was strangely feeling that something was shudder in his feet, it was an armor and Tony actives to the armor. 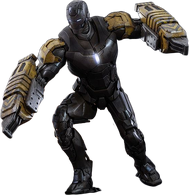 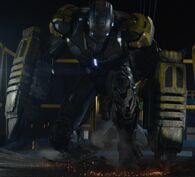 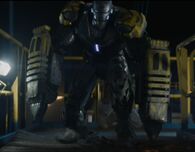 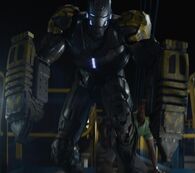 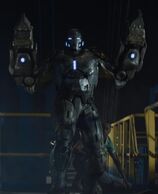 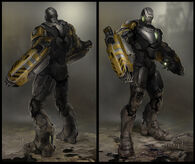 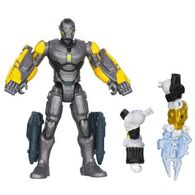 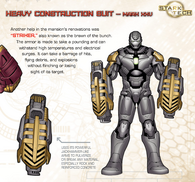 The full view of the Mark XXV, as seen in the Iron Man 3 - The Official Game application for mobile devices. 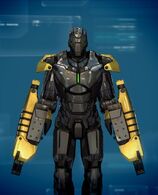 Lego Mk 25 Striker
Add a photo to this gallery

Retrieved from "https://ironman.fandom.com/wiki/Mark_XXV_-_Striker?oldid=88435"
Community content is available under CC-BY-SA unless otherwise noted.