Tony Stark: "You're right, we do need back up."
Rhodey: "Yeah, a bunch."
―Tony and Rhodey talking about the "House Party Protocol" suits while waiting for them to show up.

The Mark XXXIII (Mark 33), also known by its code name as the "Silver Centurion", is an Enhanced Energy Suit, and was one of several new Iron Man Armors created by Tony Stark as part of the Iron Legion. The armor was created sometime after the Battle of New York.[1]

The Mark XXXIII suit is primarily deep crimson red in color, with golden and silver highlights, and features a triangular shaped Unibeam together with it's chest piece, which follows the shape of the Unibeam. It was designed for energy amplification and redirection, and thus has a distinctive body shape, being angular and polygonal.

It's armor plating are not boxy and square like like it's predecessors but more sleek and triangular, giving it a sharp, crisp look.

The Mark XXXIII has an Enhanced Energy Output that allows it to transfer energy to the various Repulsors in it's system, including the Unibeam.

The armor features an extendable Blade that can be quickly activated from both of the armor's gauntlets.

The Mark XXXIII has powerful repulsor propelled thrusters equipped on its back.

The Mark XXXIII, along with all the other newly built Mark suits, uses a more advanced technology that was based off on the Mark VII's technology, which is able to wrap itself around Tony's body, without the aid of robotic arms or any external mechanics.

The Mark XXXIII is equipped with more powerful repulsors, but uses the standard Repulsor technology.

The Mark XXXIII features a triangular Unibeam in it's chest piece, which uses the new and improved Vibranium Arc Reactor Mark II. It's Unibeam is in a shape of a trapezoid-like triangle shaped piece, and is surrounded by another batch of triangular plates that make up the whole part of the armor's chest piece.

The armor also features an extendable Titanium Blade that can be quickly activated from one of the armors gauntlets.

This armor contained numerous infrared flares, another feature common with some of its predecessors.

Because of this, Stark began working on the Iron Legion, and through its development, created several Iron Man Armors, from the Mark VIII to the Mark XXXII all featuring various designs and purposes. After the Mark XXXII / Romeo's completion, Stark proceeded to working on his next armor, the Mark XXXIII.

With Silver Centurion's completion, Stark proceeded to work on a new type of suit for Disaster Rescue missions. With unique features and abilities, the Mark XXXIV / Southpaw was created.

The Mark XXXIII was activated by J.A.R.V.I.S. along with all the other armors in the basement of Tony's Malibu Mansion, under the House Party Protocol ordered by Tony. It then flew out of the Hall of Armors and went towards the Roxxon Oil Rig together with the other 35 armors.

When the Iron Legion arrived, the Mark XXXIII was the third suit and one of the first seven armors to appear in the scene together with Mark XVII, Mark XXXIX, Mark XL, Mark XXXV, Mark XV and Mark XXVII. After, it formed a line with the other armors that surrounded the area.

After that, the armor can be seen hovering in the background, awaiting Tony's orders along with the other armors, while the Extremis Soldiers are surprised with the arrival of the Iron Legion.

Tony then gives J.A.R.V.I.S. the order to "Target all Extremis Heat signatures. Disable with extreme prejudice.", and JARVIS responds with "Yes sir!", which echoes throughout all of the armors, including the Mark XXXIII.

The armor starts targeting and attacking Extremis Soldiers after, and fights them off with the help of the other armors during the ongoing battle. In the midst of the battle, the armor is summoned by Tony, and is controlled by JARVIS in which he brings the armor to Tony for his use.

The Mark XXXIII then lands on the platform Tony and Rhodey are in, and opens up. Tony quickly dons the armor after, and tells Rhodey that he's got him covered, when Rhodey asks him for an armor.

Tony flies off with Mark XXXIII, and blasts off an Extremis Soldier on a platform and moments later enters into the area where Pepper is held captive. He searches for Pepper and finds her under a large amount of Debris. He tries lift the debris, but Pepper regains her consciousness and quickly tells him to stop, in which Tony does so.

Tony bends down and lifts the armor's face mask and talks to Pepper, to which she replies in frustration. Tony tries to reach Pepper's hand and when he almost does, Aldrich's arm suddenly appears and tears through the debris as well as rips the Arc Reactor of the Mark XXXIII, severely damaging it and rendering the armor powerless. Making Tony fall down to the ground.

Aldrich resurfaces from the debris and mocks Tony to Pepper. He goes on top of Tony, who is now stuck and helpless on the floor, and tells him not to get up. As Tony lies on the floor, Aldrich teases him in front of Pepper, until he tells him to close his eyes as he prepares to kill Pepper.

As Aldrich's hand heats up, Tony activates the Blade equipped on the armor's arm and cuts Aldrich's arm off leaving him in pain, as it regrows and giving Tony time to escape. He then struggles to get out of the armor, and the Mark XXXIII then detaches itself from Tony, as he finds another way to save Pepper as the Rig slowly collapses.

The Mark XXXIII was left in the room, and was no longer used by Tony. This is the armor's last appearance as it is rendered powerless with its destroyed Arc Reactor, thus it being completely useless. It is unclear, due to its damaged state, whether or not the Mark XXXIII self destructed.

A highly reinforced and energy-efficient suit that is designed to protect against acid, extreme temperatures, radiation, and electric shocks. It is equipped with pulse bolts and a hyper-sonic sound emitter.

The Mark XXXIII, also known as the Silver Centurion, an Enhanced Energy Suit, in the Iron Man 3 movie theatrical poster. 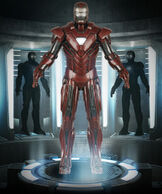 The Mark XXXIII in full view.

The Mark XXXIII in flight. 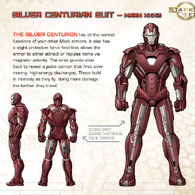