The Mark XXXII (Mark 32), also known by its codename as "Romeo", is an Enhanced RT Suit, and was one of several new Iron Man Armors created by Tony Stark as part of the Iron Legion. The armor was created sometime after the Battle of New York.[1]

The suit earned it's name "Romeo", because it has an Enhanced Chest Repulsor RT that was built within the suit, that makes it look like a big heart, which resembles that of "Romeo's", and is where it's name is derived from, as well as where it's specialty and most notables features lie.

The Mark XXXII has black and silver plates in it's overall armor design. It has an enlarged Unibeam, as well as it's chest piece, which is a similar characteristic to the Mark XVII.

The Mark XXXII has an Enhanced Power Output, which is primarily directed to it's Unibeam. This feature would later be used and succeeded in the Mark XXXIII.

Classified as an "Enhanced RT Suit" the armor is specialized for intensive firefights with the Central Unibeam Projector as the strongest weapon of the suit, it can fire much more Repulsor energy than its predecessors, the suit's weaponry grants damage much more powerful than usual levels while featuring stronger electromagnetism for Repulsor-based armaments such as Repulsor Shields.

The Mark XXXII is also designed to withstand higher firepower and damage. Durability is also improved with the help of Repulsor Shields. The suit's leg supports are fitted with extra plates giving it tactical advantage and strength through flight.

Classified as a Lightweight Enhanced Chest RT Suit, the Mark XXXII is much faster and more agile than any other armor with an oversized chest RT.

The "Romeo" features an enhancement unique to its predecessors, it features an extremely enlarged and increased RT Core Unit being able to fire an enormous and much tactful Unibeam Blast than other armors preceding Mark XXXII.

The Mark XXXII, along with all the other newly built Mark suits, uses a more advanced technology that was based off on the Mark VII's technology, which is able to wrap itself around Tony's body, without the aid of robotic arms or any external mechanicals.

The Mark XXXII is equipped with the same standard Repulsor technology.

The Mark XXXII has an enlarged chest RT, as well as the Unibeam. The overall design of the chest piece takes an appearance of a heart when including the large metal bar shoulder pads that are connected to it.

Sometime after the Battle of New York, Tony, who was haunted by what happened in New York, got obsessed in making more Iron Man suits. One of them was the Mark XXXII.

He designed the Mark XXXII to specialize in pure firepower, and created an oversized chest RT that was built within the suit's armor, for it to be able to fire extremely immense power when used.

With Romeo's completion, Stark proceeded to work on a new type of suit with a new Energy Redirect System, resulting the in the creation of the Mark XXXIII / Silver Centurion.

When Tony's Malibu Mansion was raided, and later destroyed, the Mark XXXII along with the rest of the Iron Legion were still stored safely within the Hall of Armors Extension, as it was left undamaged during the attack. The chamber was still intact, completely sealed, and concealed from view.

The Mark XXXII was activated by J.A.R.V.I.S. along with all the other armors in Tony's basement, under Tony's order of the House Party Protocol. It then proceeded to fly towards the Roxxon Oil Rig right after, together with the other 35 armors.

When the Iron Legion arrived, the Mark XXXII surrounded the area along with the other 35 armors. Awaiting Tony's orders, it could briefly be seen in the background as the Extremis Soldiers stand surprised with the arrival of the Iron Legion.

After Tony gave J.A.R.V.I.S. the order to "Target all Extremis Heat Signatures, disable with extreme prejudice.", the Mark XXXII, controlled by J.A.R.V.I.S. started targeting and attacking the Extremis Soldiers in the area followed by the other armors.

The Mark XXXII was never seen on-screen clearly, but could be briefly seen attacking Extremis Soldiers when Rhodey is attempting to save the president.

The armor was presumed to have fought and killed several extremis soldiers during the fight, as it was one of the last 21 armors left standing and succeeded in eliminating the remaining extremis forces with the help of the other Iron Legion armors. The Mark XXXII then resumes to flying around the oil rig in the aftermath of the battle.

The Mark XXXII was then detonated by J.A.R.V.I.S. for fireworks along with the other 20 armors, under the Tony's order of the "Clean Slate Protocol". This was to show Tony's devotion to his girlfriend, Pepper Potts. It was the 13th suit to detonate.

Featuring a boosted RT unit, this suit is all about power. The Unibeam and Repulsors fire with 2x the output of the Mark VII. Speed and agility have also been increased. Infrared Scanners and ECM Jamming boost its search and engagement functionality. 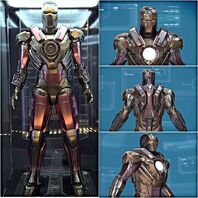 Retrieved from "https://ironman.fandom.com/wiki/Mark_XXXII_-_Romeo?oldid=88440"
Community content is available under CC-BY-SA unless otherwise noted.