The Mark XXXIV (Mark 34), also known as "Southpaw", is a Disaster Rescue Suit Prototype, and was one of the many newly built suits created by Tony Stark, sometime after the events of The Avengers.

It was built as a prototype of the Mark XXXV, and was the first Disaster Rescue Suit built by Tony, to handle disaster involved situations. It was later succeeded by the Mark XXXV, which was a complete version of the suit, having a single claw on each of the suit's arms, instead of one.

The Mark XXXIV's overall design includes black and silver plates in the armor. It has a large claw-like arm in the left, while the other one is a normal arm equipped with a standard Repulsor. It has large and unique shoulder pads, and a somewhat streamline-like armor body. Most of its design is based off the Mark XIV, with the exception of the large and unique shoulder pads, retractable left claw, and the armor's helmet.

Since the armor is a "Disaster Rescue Suit Prototype", it can protect its user from various types of natural disasters such as tornadoes, hurricanes, and earthquakes. This armor is bullet-proof, just like all of Tony Stark's other armors.

The Mark XXXIV has a powerful retractable claw on it's left arm, which is used to carry and remove debris.

The Mark XXXIV, along with all the other newly built Mark suits, uses a more advanced technology that was based off on the Mark VII's technology, which is able to wrap itself around Tony's body, without the aid of robotic arms or any external mechanicals.

This armor was not made for combat, but rather for rescue missions, but it had an arsenal of conventional weaponry available on most of Stark's armors. Its repulsor rays could be focused into slow moving balls of energy, by the armors claw, that exploded on contact, and it had an average RT beam.

The Mark XXXIV is equipped with the standard based Repulsors used by the previous Iron Man armors. The repulsion system is Repulsion Mark I, and it is used for combat, flight stabilization and destroying heavy objects or debri.

The Mark XXXIV has a standard circular-shaped Unibeam. It is powered by a Vibranium Arc Reactor Mark II. The armor's arc reactor is surrounded by a thick plated armor in the chest area, which is also painted a dark color, resembling a near black appearance.

Because of this, Stark began working on the Iron Legion, and through its development, created several Iron Man Armors, from the Mark VIII to the Mark XXXIII all featuring various designs and purposes. After the Mark XXXIII / Silver Centurion's completion, Stark proceeded to working on his next armor, the Mark XXXIV. He built this armor for disaster rescue missions and built a single removable left pneumatic pincher for helping victims that might be trapped under rubble or debris.

When Tony's Malibu Mansion was raided, and later destroyed, the Mark XXXIV along with the rest of the Iron Legion were still stored safely within the Hall of Armors Extension, as it was left undamaged during the attack. The chamber was still intact, completely sealed, and concealed from view.

Activation of the House Party Protocol

The Mark XXXIV was activated by J.A.R.V.I.S. along with all the other armors in the basement of Tony's Malibu Mansion, under the order of the "House Party Protocol" issued by Tony. It then flew out of the Hall of Armors and went towards the Roxxon Oil Rig together with the other 35 armors.

Tony then gives J.A.R.V.I.S. the order to "Target all Extremis Heat signatures. Disable with extreme prejudice.", and JARVIS responds with "Yes sir!", which echoes throughout all of the armors, including the Mark XXXIV. The armor starts targeting and attacking Extremis Soldiers after, and fights them off with the help of the other armors during the ongoing battle. Mark XXXIV, was blown up in the "Clean Slate Protocol" by Tony as a sign of devotion to his girlfriend, Pepper Potts.

DISASTER RESCUE PROTOTYPE SUIT WITH SINGLE RETRACTABLE PNEUMATIC PINCHER AND MADE UP OF LIGHTWEIGHT ALLOY ARMOR. 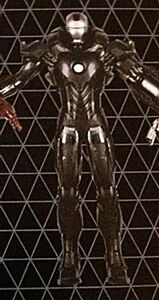 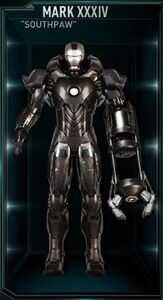 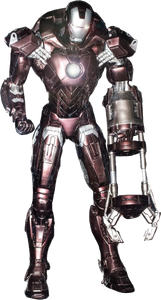 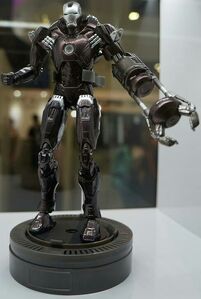 Retrieved from "https://ironman.fandom.com/wiki/Mark_XXXIV_-_Southpaw?oldid=88442"
Community content is available under CC-BY-SA unless otherwise noted.