The Mark XXXIX (Mark 39), also known by its names as "Gemini" and "Starboost", is a Sub-Orbital Suit, and was one of several new Iron Man Armors created by Tony Stark as part of the Iron Legion. The armor was created sometime after the Battle of New York.[1]

It was featured in Iron Man 3, and made its debut when Tony ordered J.A.R.V.I.S. to initiate the "House Party Protocol" in which it was activated along with all the other suits to aid him in his fight against Aldrich Killian.

The suit earned its name "Starboost" for having the ability to travel into sub-orbital ranges and for venturing into space, as it is derived from its name. It was built with an armor that could stand the cold temperature and radiation in space and was built in with an oxygen tank to allow Tony to be able to breathe while he was in space.

The Mark XXXIX has a white, black and silver color scheme designed to suit space travel. This is the first and only armor to have a white color scheme. The suit is made of a special alloy that absorbs Tony's arc reactor signal. Attached to the back are removable secondary thrusters to get through the atmosphere.

It also has a unique Arc Reactor design, with three lines from each corner of the triangular reactor joining together in the middle. Additionally, the gold coloring of the face mask extends futher up the forehead than most armors, implying a larger field of vision equivalent to astronaut helmets.

The Mark XXXIX has the unique ability to fly at extremely high altitudes, and even reach into space. The armor is advanced enough to go out into the sub-orbit of Earth and the very vacuum of space itself.

The Mark XXXIX is extremely durable. The armor is capable of shielding the user from various temperatures, radiation, and it is also completely bullet-proof.

In order for it to break the pull of Earth's gravity, the Mark XXXIX has to be capable of flight many times faster than the speed of sound, making it one of the top 6 fastest suits in Tony's arsenal.

The Mark XXXIX has powerful Repulsor powered thrusters on it's back, used to propel itself through atmosphere.

The Mark XXXIX, along with all the other newly built Mark suits, uses a more advanced technology that was based off on the Mark VII's technology, which is able to wrap itself around Tony's body, without the aid of robotic arms or any external mechanicals.

The Mark XXXIX has a trapezoid shaped Unibeam, powered by the new and improved Vibranium Arc Reactor Mark II.

Based from the description in Iron Man 3 - The Official Game, the Mark XXXIX is equipped with a Large Concussive Cannon. It is possible that this cannon could be located in the forearm of one of the gauntlets.

Because of this, Stark began working on the Iron Legion, and overtime, created several Iron Man Armors, from the Mark VIII to the Mark XXXVIII, which were all built with various designs and purposes. After the Mark XXXVIII / Igor's completion, Stark proceeded to working on his next armor, the Mark XXXIX.

With Gemini's completion, Stark proceeded to work on a new type of suit that can travel at hyper-velocity speeds, creating the Mark XL.

When Tony's Malibu Mansion was raided, and later destroyed, the Mark XXXIX along with the rest of the Iron Legion were still stored safely within the Hall of Armors Chamber, as it was left undamaged during the attack. The chamber was still intact, completely sealed, and concealed from view.

The Mark XXXIX was activated by J.A.R.V.I.S. along with all the other armors in the basement of Tony's Malibu Mansion, after Tony gave the order of the "House Party Protocol". It then flew towards the the Roxxon Oil Rig, together with all the other 40 armors.

When the Iron Legion arrived, the Mark XXXIX was one of the first seven armors to appear on the scene, together with the Mark XVII, Mark XXXV, Mark XV, Mark XXXIII, Mark XL and Mark XXVII. It surrounded the rig, along with all the other armors and waited for Tony's orders through J.A.R.V.I.S. As Tony finished up, he told J.A.R.V.I.S. to "Target Extremis heat signatures. Disable with extreme prejudice." The Mark XXXIX then started targeting and attacking the Extremis Soldiers after. It fought off the soldiers during the battle with the help of the other armors.

The Mark XXXIX then continued battling the Extremis Soldiers in the rig along with the help of the other armors.It was seen again when a pole was thrown at it. It dodged the pole firing a repulsor blast, knocking over a extremis soldier causing their body to break a cable moving the shipping container Pepper Potts was held in. The armor was presumed to have fought and killed several extremis soldiers during the fight, as it was one of the last 21 armors left standing and succeeded in eliminating the remaining extremis forces with the help of the other Iron Legion armors. The Mark XXXIX then resumes to flying around the oil rig in the aftermath of the battle.

The Mark XXXIX was then detonated by J.A.R.V.I.S. for fireworks along with the other 20 armors, under the Tony's order of the "Clean Slate Protocol". This was to show Tony's devotion to his girlfriend, Pepper Potts. It was the 5th suit to detonate.

A reinforced sub-orbital suit with upgraded Thrusters which power it to impressive speeds at very high altitudes. This suit is equipped with a powerful Concussion Cannon.

In Iron Man 3 - The Official Game, the Mark XXXIX appears as a playable armor under the name of Starboost. It has a score multiplier of x5.5. In the game it's description says that it contains a Large Concussive Cannon. It is the second to the last armor in the Unibeam Blast section. 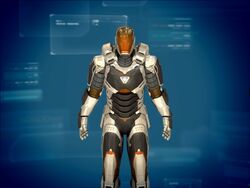 The full widescreen game view of the Mark XXXIX. 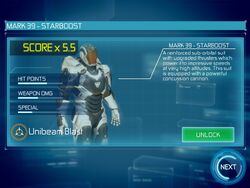 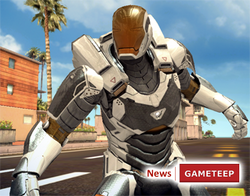 In Marvel Heroes, an online MMO based in the Marvel comics world, a costume unlock for Iron Man is the Mark XXXIX design. In the game the armor is not called Mark XXXIX, but simply Starboost. Also in the game the hero Squirrel Girl can summon Iron Man in this armor to fight along side her. 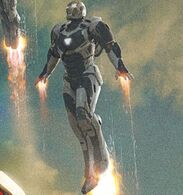 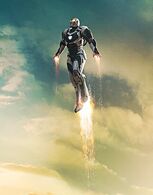 The Mark XXXIX in flight.

The Mark XXXIX, also known by it's alternative name as "Starboost", shown in a promotional poster.

The Mark XXXIX in a Marvel poster, shown in different angles. 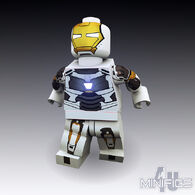 A rendering of the figure in lego.

The Mark XXXIX, as a toy in the Iron Man Franchise. 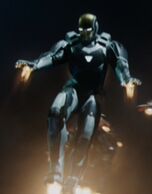 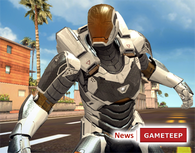 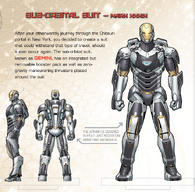