The Mark XXXI (Mark 31), also known by its name as "Piston", is a Fully Loaded High-Velocity Centurion Suit, and was one of several new Iron Man Armors created by Tony Stark as part of the Iron Legion. The armor was created sometime after the Battle of New York.[1]

It was featured in the Iron Man 3, and made it's debut when Tony ordered J.A.R.V.I.S. to initiate the "House Party Protocol", in which it was activated along with all the other suits to aid Tony in his battle against Aldrich Killian.

The Mark XXXI has teal and silver colored plates. Its face mask is colored white, and it uses one of the basic designs of the Iron Man suits, only it is more enhanced and lighter in structure. Its design is based almost completely on the Mark VIII, with only the helmet, color scheme, and capabilities of the armor being different.

The Mark XXXI can fly at high speeds, and is faster than most of the Iron Man armors. Being the armor as the test prototype for its speed ability, it is the second to the fastest armor among all of Tony's armors, with the first going to the Mark XL.

The armor's speed can be estimated to reach around Mach 5 more or less. The Mark XIX precedes the armor's speed, therefore it being a prototype like suit for the even faster Mark XL.

The Mark XXXI has an Enhanced Energy Output that allows it to transfer energy to the various repulsors in its system, including the Unibeam.

The Mark XXXI has powerful repulsor propelled thrusters equipped to its back.

The Mark XXXI, along with all the other newly built Mark suits, uses a more advanced technology that was based off on the Mark VII's technology, which is able to wrap itself around Tony's body, without the aid of robotic arms or any external mechanics.

The Mark XXXI is equipped with standard repulsors technology enhanced to enable increased speed in flight.

The Mark XXXI has a standard circular-shaped Unibeam.

The Mark XXXI is equipped with the same shoulder-mounted mini-missiles as the Mark VII. It also has a rocket on each arm.

This armor is also equipped with the same lasers as the Mark VII.

The armor was created by Tony Stark with the Iron Legion Sometime after the events of the Avengers. He decided to make this armor faster than the prototype, the Mark XIX.

With Piston's completion, Stark proceeded to create the next armor, the Mark XXXII, also known as "Romeo".

When Tony's Malibu Mansion was raided, and later destroyed, the Mark XXXI along with the rest of the Iron Legion were still stored safely within the Hall of Armors Extension, as it was left undamaged during the attack. The chamber was still intact, completely sealed, and concealed from view.

The Mark XXXI was activated by J.A.R.V.I.S. along with all the other armors in the basement of Tony's Malibu Mansion, under the order of the House Party Protocol given out by Tony. It then flew out of the Hall of Armors and went towards the Roxxon Oil Rig together with all the other 35 armors.

When the Iron Legion arrived, the Mark XXXI surrounded the area with other other armors and waited for Tony's commands. When Tony ordered J.A.R.V.I.S. to "Target all Extremis heat signatures, disable with extreme prejudice", J.A.R.V.I.S.' responded with "Yes sir!", which echoed throughout all the suits, including the Mark XXXI.

The Mark XXXI then started targeting the Extremis Soldiers in the area, and was the first armor to start attacking. It flew at a high speed and pushed one soldier off a column. It then landed on a platform, and blasted one soldier with it's Unibeam. After, the armor started fighting off three soldiers at once.

Flying blind and at a high-speed, it crashed onto the base of the oil rig along with the Extremis soldier which destroyed the armor completely and killed the Extremis soldier that held onto it. Its crash caused a huge explosion that rocked the rig, and caused it to destabilize. Because of this, Tony requested J.A.R.V.I.S. to keep the rig steady using Igor, and the Mark XXXVIII went into action and held the Oil Rig steadily during the entirety of the battle.

The Mark XXXI is a playable armor in the game, and can only be unlocked by being one of the Top 10,000 Players in the world by entering the the Game Tournament. It is a Tournament Reward Armor, and is the most powerful armor available in the game. 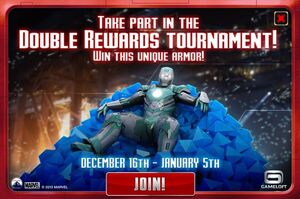 The Mark XXXI / Piston's release poster in the game.

The Mark XXXI in Iron Man 3.

The Mark XXXI fighting the Extremis Soldiers in Iron Man 3. 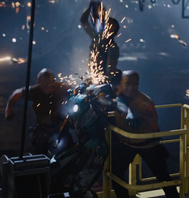 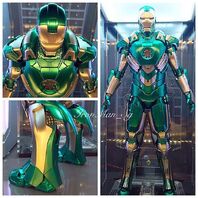 Retrieved from "https://ironman.fandom.com/wiki/Mark_XXXI_-_Piston?oldid=88439"
Community content is available under CC-BY-SA unless otherwise noted.