"Jarvis! Get Igor to steady this thing!"
―Tony ordering J.A.R.V.I.S. to make Igor hold the dock crane in place, to keep it from collapsing.

The Mark XXXVIII (Mark 38), also known by its name as "Igor", is a Heavy Lifting Suit, and was one of several new Iron Man Armors created by Tony Stark as a part of the Iron Legion. The armor was created sometime after the Battle of New York.[1]

It was featured in Iron Man 3, and made it's debut when Tony ordered J.A.R.V.I.S. to initiate the "House Party Protocol", in which it was activated along with all the other suits to aid Tony in his battle against Aldrich Killian.

The suit was named "Igor", because it of its design, bearing a resemblance to some features of a real "Igor", featuring a slouched posture and bulky appearance. It specializes in lifting heavy objects such as debris, and is capable of the  tremendous strength and power.

The Mark XXXVIII's design is unique compared to any other armor built by Tony Stark. Its resemblance is similar to the shape and size of an Igor, hence where the suit get its name.

The Mark XXXVIII has blue and silver plates, with blue as the dominant color. The silver plates cover areas that highlight the armor's appearance, such as the face plate, the arms and legs and the middle area of the armor's abdomen. The Mark XXXVIII has heavier plating and also much larger legs and forearms and a very heavy bulky and stubby design.

Having been built to carry and lift heavy objects, the Mark XXXVIII has an incredible amount of strength and power. Capable of lifting almost anything ten times its size (such as the oil rig), the armor has fives times the regular strength of a simple Iron Man armor. With this ability, the Mark XXXVIII is the strongest of all armors.

A feature that helps the armor carry heavy and massive objects is it's Spine Lifter, in which it supports whatever object it carries and applies the same amount of pressure to counteract the pressure pressing down on the Mark XXXVIII. it's obviously shown that the Mark XXXVIII can lift 100 tons and is able to carry objects much larger than it with gauntlets that slightly collapse on itself. the arms and legs can also lock in place to continuously lift objects.

The Mark XXXVIII has a powerful, pressurized support lifter located in the armor's spine area. Most commonly referred to as the Spine Lifter, this feature allows the Mark XXXVIII to carry heavy and massive objects, such that it could be ten times the armor's size, and could support the weight easily without breaking. the spine lifter is located on the most reinforced part of the suit and is designed to extend so it can stabilize the weight to carry it and can obviously lift objects even heaver than an oil rig, some would say somewhere around 100 tons.

This feature is unique only with this suit, and is the armor's main function, as well as its most notable feature.

The Mark XXXVIII, along with all the other newly built Mark suits, uses a more advanced technology that was based off on the Mark VII's technology, which is able to wrap itself around Tony's body, without the aid of robotic arms or any external mechanicals.

The Mark XXXVIII has standard heavy duty repulsors, used to help lift up the suit from it's very heavy weight. It is not used for combat, and is only used when the suit flies.

The Mark XXXVIII has a horizontal rectangular Unibeam, that can project a good amount of power strong enough to destroy and clear debris in its path.

Because of this, Stark began working on the Iron Legion, and over time, created several Iron Man Armors, from the Mark VIII to the Mark XXXVII, all built with various designs and purposes. After the Mark XXXVII / Hammerhead's completion, Stark proceeded to working on his next armor. With the recent development of new designs and technology used for his previous armors, Stark came up with the idea to create another unique armor.

Based on a totally new design by Stark, the Mark XXXVIII was born. The armor was designed to specialize specifically in Lifting Heavy Objects, and thus was titled as the "Heavy Lifting Suit" for it's capabilities. Because of it's special features, the armor was large in size, making it the biggest Iron Man Armor to be created at that time.

During it's creation, Stark also gave the suit the name "Igor", because of it's large and slouched appearance.

It was presumed that during it's initial completion, the armor was tested a number of times before it reached perfection, became fully functional, as well combat ready.

Completion and Building the Winery

After completing the armor, Igor was called for duty and helped Stark build the winery in the basement of his mansion.

When the Winery completed construction, Stark stored the Mark XXXVIII in Hall of Armors Chamber beneath his Malibu House, where all the other previous Iron Man Armors he completed were stored in as well.

With Igor's completion, Stark proceeded to work on a new type suit, which would be the final version of his prototype space armors, the Mark XXXIX / Gemini - Sub-Orbital Suit.

The Mark XXXVIII was activated by J.A.R.V.I.S. in the basement of Tony's Malibu Mansion, under the order of the House Party Protocol issued by Tony. It then flew out of the Hall of Armors and went towards the Roxxon Oil Rig together with the other 35 armors.

Later it was used to lift a oil rig after Tony called JARVIS to do so.

The Mark XXXVIII most likely have survived and blown up by JARVIS under Tony's order of the "Clean State Protocol" as a sign of his devotion to his girlfriend, Pepper Potts. Because the Mark XXXVIII was supporting the oil rig and it would've fallen if blown up at the same time as the other armors. Due to the oil rig being unstable Tony ordered it to remain as the main form of support for the rig to prevent it from exploding, to avoiding it from being destroyed.

The Mark XXXVIII is a playable suit in the Iron Man 3 - The Official Game, and can be unlocked by unlocking all other armors first. It is one of the Special Offer Armors, and is not limited.

The Mark XXXVIII is a playable armor in the game. This armor can be unlocked, and is located at the Roxxon Power Station.

When in Roxxon Power Station, you met Agent Carter that was retired, when you greet to her, She said that Carter came here once, years ago. She was investigating of a friend of mine, and the friend's trail causes Carter to led here.

Accepting the mission will cause your vision to turn gray line in the good ol' days. To complete this procedure, you need to kill 20 of these Roxxon guards, and once you completed. You get the reward: Mark XXXVIII! 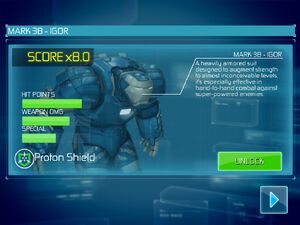 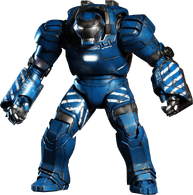 The Mark XXXVIII smashing through a metal crate as it makes it's appearance in the movie, Iron Man 3. 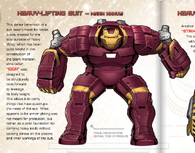 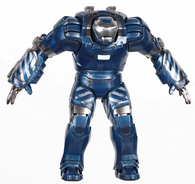 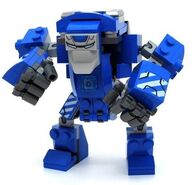 Retrieved from "https://ironman.fandom.com/wiki/Mark_XXXVIII_-_Igor?oldid=89660"
Community content is available under CC-BY-SA unless otherwise noted.