The Mark XXXVII (Mark 37), also known by its codename as "Hammerhead", is a Deep Sea Suit, and was one of several new Iron Man Armors created by Tony Stark as part of the Iron Legion. The armor was created sometime after the Battle of New York.[1]

The suit earned its name the "Hammerhead", for being to able to travel undersea and fully submerge itself without its system short circuiting and eventually malfunctioning. It was built for traveling deep underwater and has a thick reinforced armor specially built for the crushing pressure of subaqueous journeys.

The Mark XXXVII has dark sea green and golden colored plates in it's design. This is the first and only armor to feature sea green in its color scheme, making it fairly unique. It's body armor re-uses and perfects the original design used in the Mark X, having a circular and triangular shape in the chest piece, surrounding the Unibeam. It is equipped with visible and powerful extra repulsors, attached to the sides of the suit, in the abdomen area, that were meant to increase flight speed and power.

Just like the Mark VI, the Mark XXXVII has the unique ability to travel underwater without allowing water to seep in through the armor. The armor has water resistant plating that blocks the passage of water, and is sealed tightly to fully prevent water from getting into the armor's systems and affecting the person using the armor.

The armor has various features. They include headlights, a hydrogen converter, an advanced donning system, infrared scanners, and a pressurized system.

The Mark XXXVII, along with all the other newly built Mark suits, uses a more advanced technology that was based off on the Mark VII's technology, which is able to wrap itself around Tony's body, without the aid of robotic arms or any external mechanicals.

The Mark XXXVII has standard based Repulsors.

Since the armor was built to go on underwater journeys, the Mark XXXVII contains Torpedoes for use when on underwater missions. This is also the first and only armor to be equipped with torpedoes.

The Mark XXXVII has an Electric Field equipped into it's system. One of it's primary weapons, it uses it only when it is under water being attacked by enemies. Although mentioned, it is unknown where this weapon is located.

Because of this, Stark began working on the Iron Legion, and overtime, created several Iron Man Armors, from the Mark VIII to the Mark XXXVI, all built with various designs and purposes. After the Mark XXXVI / Peacemaker's completion, Stark proceeded to working on his next armor with the ability to travel underwater at high speeds, the Mark XXXVII.

With Hammerhead's completion, Stark proceeded to work on a new type of suit with increased strength and power, and built to lift heavy objects, the Mark XXXVIII / Igor.

When Tony and Rhodey head towards the Roxxon Oil Station, Tony orders J.A.R.V.I.S. to initiate the "House Party Protocol", which activates all the suits in the Hall of Armors, including the Mark XXXVII.

Just after the suits surround the station in the form a large circle, the Mark XXXVII, controlled through J.A.R.V.I.S., follows Tony's orders to "Disable all Extremis Heat signatures with extreme prejudice.", and then it locks it's targets on the Extremis Soldiers, and ensues to eliminate whatever it targeted.

The armor was presumed to have fought and killed several extremis soldiers during the fight, as it was one of the last 21 armors left standing and succeeded in eliminating the remaining extremis forces with the help of the other Iron Legion armors. Hammerhead then resumes to flying around the oil rig in the aftermath of the battle.

The Mark XXXVII was then detonated by J.A.R.V.I.S. for fireworks along with the other 21 armors, under the Tony's order of the "Clean Slate Protocol". This was to show Tony's devotion to his girlfriend, Pepper Potts. It was the 15th suit to detonate.

Designed to operate underwater, this suit can unleash an electric field attack and comes equipped with torpedoes. 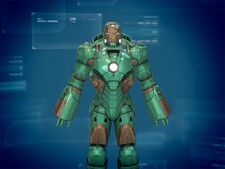 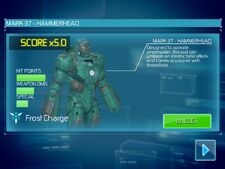 The Mark XXXVII's information in the game.

Hammerhead with the War Machine Mark II in the Summer Fever Promo Poster.

The Mark XXXVII in full view.

The Mark XXXVII in flight, as it targets and prepares to eliminate the Extremis Soldiers, in the movie Iron Man 3. 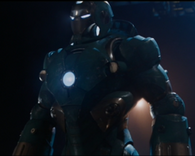 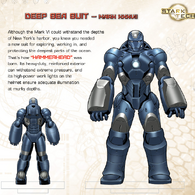 The Mark XXXVII in the marvel comics artwork. 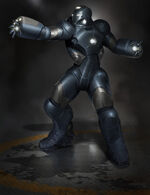 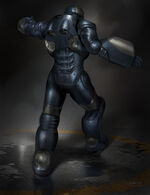 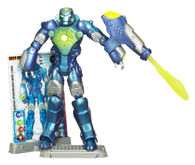 The full view of the Mark XXXVII, as seen in the Iron Man 3 - The Official Game appliacation for mobile devices. 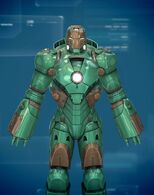