The Mark XXXV (Mark 35), also known by its codename as "Red Snapper", is a Disaster Rescue Suit, and was one of several new Iron Man Armors created by Tony Stark as part of the Iron Legion. This armor was created sometime after the Battle of New York.[1]

The Mark XXXV has a bright red colored armor, together with some dark steel silver platings on some areas. Its color is based off on that of a Lobster, together with with its long retractable pincer-like claws.

Its face plate is colored gold, and its helmet features a new design that points out edges in the face of the mask.

The armor is composed of Heavy Gauge Titanium-Gold Alloy. Thicker and heavier than the regular Iron Man Armor, the Mark XXXV's build was most likely designed to protect its user from various types of natural disasters such as tornadoes, hurricanes, and earthquakes. This armor is bullet-proof, just like all of Tony Stark's armors.

This armor was not made for combat, but rather for rescue missions, but it had an arsenal of conventional weaponry available on most of Stark's armors. Its repulsor rays could be focused into slow moving balls of energy, by the armors claws, that exploded on contact, and it had an average RT beam.

Sometime after the Battle of New York, Tony, who was haunted by what happened in New York, got obsessed in making more Iron Man suits. One of them was the Mark XXXV. He built this suit to succeed the older Mark XXXIV. This time he built two pneumatic pinchers instead of one.

With Red snappers completion, Stark proceeded to work his next armor, which resulted in the creation of Mark XXXVI / Peacemaker.

When Tony's Malibu Mansion was raided, and later destroyed, the Mark XXXV along with the rest of the Iron Legion were still stored safely within the Hall of Armors Chamber, as it was left undamaged during the attack. The chamber was still intact, completely sealed, and concealed from view.

The Mark XXXV was activated along with all the other armors in Tony's basement by J.A.R.V.I.S. from Tony's order of the "House Party Protocol". It then proceeded to fly to the Roxxon Oil Rig after.

When the Iron Legion arrived, the Mark XXXV was one of first few armors to appear on the scene, along with the Mark XVII, Mark XXXIX, Mark XXXIII, Mark XV, Mark XXVII, and the Mark XL. It surrounded the area together with the other armors, and waited for Tony's order as the Extremis Soldiers stand surprised with the Iron Legion's arrival.

It then targeted and attacked the Extremis Soldiers in the rig after Tony gave J.A.R.V.I.S. the order to "Target all Extremis heat signatures. Disable with extreme prejudice."

During the midst of the battle. armor was seen engaging three soldiers after they all jumped on it. As it was able to use it's claws to hold and drop a Extremis soldier while Mark XVII tried to help, the Mark XVII came to help it when Tony asked it to, but to no avail, Mark XVII only managed to blast one soldier and lead another off the armor.

The armor was then overwhelmed and its faceplate was ripped off, leaving only the helmet, and the inner parts of it revealed. With it flying blind, one of the Extremis Soldiers jumped off it, as it crashed to a crate in the rig, killing the other two soldiers and completely destroying the armor.

Its crash caused a large explosion, which wrecked the area where Pepper and Aldrich were in.

A reinforced suit specially designed to operate with maximum efficiency in disaster areas or war zones where innocent victims might be trapped under rubble.

The Mark XXXV is an unlockable and playable armor in the game. It was one of the few armors initially available for use during the game's release. 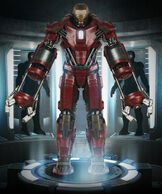 The Mark XXXV, also known as the "Red Snapper", a Disaster Rescue Suit, in the Iron Man 3 movie theatrical poster. 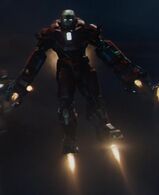 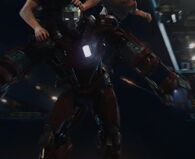 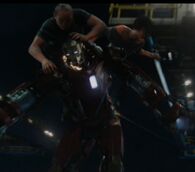 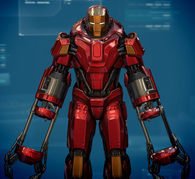 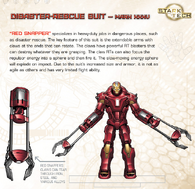 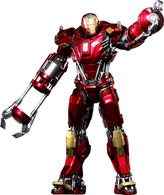 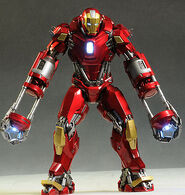 Retrieved from "https://ironman.fandom.com/wiki/Mark_XXXV_-_Red_Snapper?oldid=88444"
Community content is available under CC-BY-SA unless otherwise noted.