The Mark 20 (Mark XX), also known by its codename as "Python", is a Fully Loaded Long-Distance Prototype Suit, and was one of several new Iron Man Armors created by Tony Stark as part of the Iron Legion. The armor was created sometime after the Battle of New York.[1]

The suit earned its name "Python", because of its ability to go long distances mimicking the ability of a python. It has more energy stored into the suit's system, that is directed into its Flight System, to allow more energy to be supplied to it to endure more travel and drain the energy more slowly than the usual Iron Man suit's power does.

This is one of the many armors in the Iron Legion that uses the Mark VII designs as its base. With similar features to the former battle armor, this armor's color scheme is a unique black and gold, as opposed to the classic red and gold of the basic Iron Man armors.

Although similar to the Mark VII, this armor is less bulky than the Mark VII, especially in areas such as the chest plate, and the body armor itself. Its design is just like the Mark IX. It is lighter than it looks, because it was built with a very thin but powerful Titanium plating, which enables it to travel slightly faster, and mainly for long distances.

The Mark XX can sustain long periods of flight when used, hence its name being the Long Distance Prototype Suit. The suit's footwork and leg supports are fitted with extra plates giving it tactical advantage and strength through flight.

The Mark XX has a powerful Thruster equipped on its back. The thruster has one jet, and is the secondary power source used when in flight.

The Mark XX, along with all the other newly built Mark suits, uses a more advanced technology that was based off on the Mark VII's technology, which is able to wrap itself around Tony's body, without the aid of robotic arms or any external mechanicals.

The Mark XX has standard based Repulsor technology.

The Mark XX has a regular circular shaped Unibeam powered by the new and improved Vibranium Arc Reactor Mark II.

Numerus miniature air-to-air missiles are housed in the shoulder pods, which are a part of the detachable backpack.

Sometime after the Battle of New York, Tony, who was haunted by what happened in New York, got obsessed in making more Iron Man suits. One of them was the Mark XX.

When Tony's Malibu Mansion was raided, and later destroyed, the Mark XX along with the rest of the Iron Legion were still stored safely within the Hall of Armors Chamber, as it was left undamaged during the attack. The chamber was still intact, completely sealed, and concealed from view.

The Mark XX was activated by J.A.R.V.I.S. along with all the other armors in the basement of Tony's Malibu Mansion, under the "House Party Protocol" ordered by Tony. It then flew out of the Hall of Armors, and went towards the Roxxon Oil Rig together with the other 34 armors.

When the Iron Legion arrived, the Mark XX arrived with all the other armors and waited for Tony's commands. Tony then orders J.A.R.V.I.S. to "Target all Extremis Heat signatures. Disable with extreme prejudice.", and JARVIS' responds with "Yes sir!", which echoes through all of the armors including the Mark XX. The armor could be briefly seen hovering behind Tony's left side when he said "What are you waiting for? It's Christmas... Take them to church."

The armor then starts targeting and attacking Extremis Soldiers and fights off many soldiers with the help of the other armors during the ongoing battle. The Mark XX could be briefly seen engaging an Extremis soldier that jumped on its back in the background when Tony is trying to save Pepper.

The armor was presumed to have fought and killed several extremis soldiers during the fight, as it was one of the last 21 armors left standing and succeeded in eliminating the remaining extremis forces with the help of the other Iron Legion armors. The Mark XX then resumes to flying around the oil rig in the aftermath of the battle.

The Mark XX was then detonated by J.A.R.V.I.S. for fireworks along with the other 20 armors, under the Tony's order of the "Clean Slate Protocol". This was to show Tony's devotion to his girlfriend, Pepper Potts. It was the 6th suit to detonate.

It was made available for purchase again for a limited-time on December 13, 2013 to December 18, 2013 but was extended again along with the new Mark XXVIII armor until December 27, 2013.

The Mark XX was a tournament reward suit that was rewarded to the top 10,000 when the tourney prize was introduced, but was later superceded by the Mark XXXI as the prize for the top 10,000.

The Mark XX, also known as the "Python", a Long-Distance Suit. 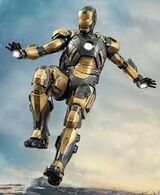 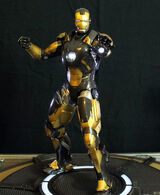 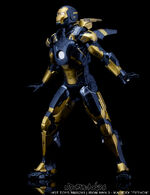 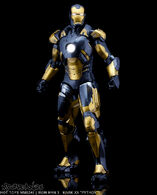 Retrieved from "https://ironman.fandom.com/wiki/Mark_XX_-_Python?oldid=88430"
Community content is available under CC-BY-SA unless otherwise noted.