The Other
Adam-IV
Dr. Fuller Tielhard

Michael Korvac is a character appearing in Marvel Comics. One of Marvel's first true anti-villains, Korvac is a cybernetically enhanced human who attempts to use the Power Cosmic to reshape the world as he sees fit.

Michael Korvac was born in the year 2997 in the alternate reality of Earth-691. By the age of twenty, he was already a talented computer technician, but he felt that his superiors were not appreciating his talents. Consequently, when a hostile alien force, the Brotherhood of Badoon, invaded the Sol System, Korvac willingly collaborated with them, and was rewarded with a position as overseer of the vast analytical systems that maintained the Brotherhood's burgeoning empire. But the Brotherhood proved to be harsh taskmasters, working Korvac to the point of exhaustion. As punishment for his failure, Korvac's upper body was grafted into a floating computer module to make him a more efficient slave.

Korvac's upgrades worked all too well, and it was not long before he began plotting revenge against his masters for robbing him of his humanity. Before these plans could achieve fruition, however, Korvac was abducted by the Grandmaster, an ancient alien who occupies himself in his immortal years with gambling and games. Pitted against the Defenders in an interplanetary game of chess, Korvac deliberately threw his fight and discreetly scanned and analyzed the Grandmaster's cosmic powers. Upon being returned to his own time, Korvac used what he learned to overthrow the Brotherhood, and soon made his own bid for interstellar conquest. Teaming with a group of alien outlaws he dubbed the Minions of Menace, Korvac plotted to make the sun go nova, hoping to siphon the resulting energy to boost his own power to limitless levels. This plot was thwarted by the Guardians of the Galaxy (the 30th Century Lineup of Major Victory, Jupiter Man, Nikki Gold, Starhawk, Martinex, and Yondu Udonta) and a time-travelling Thor, but Korvac managed to escape by teleporting to safety as his ship exploded.

Korvac followed Thor to present day Earth-616, where he happened upon the Tau II, the worldship of planet consuming entity Galactus. Attempting to download the ship's vast treasure trove of knowledge into his own system, Korvac was imbued with the Power Cosmic. Now elevated to near omnipotence, Korvac altered his appearance into an idealized version of his original human form and traveled to Earth with the intent of reshaping it into a utopia.

The Guardians quickly discover that Korvac has travelled into the past, and, recalling Major Victory's youth in present day Earth-616, they deduce that Korvac has travelled back to that time to erase their leader from existence. They travel back in time and warn the Avengers of the threat Korvac poses. Meanwhile, the Collector, the brother of the Grandmaster, is also alerted to Korvac's arrival, and he anticipates him eventually becoming an even greater threat than Thanos. He imbues his daughter, Lady Carina, with a human identity, Carina Walters, and sends her to Earth in an attempt to neutralize him. Korvac meets Carina at a fashion show in New York, but the two quickly fall in love, prompting Carina to warn Michael of her father's intentions. Korvac kills the Collector with a lightning bolt just as he is in the process of warning the Avengers about the threat that Korvac poses. Realizing that he could still be destroyed by the Ultimate Nullifier, a weapon that Galactus reserves as a punishment for those who attempt to steal the power cosmic, Korvac made it a point to hide his existence from the Great Universal Powers until he was strong enough to effectively challenge them. He and Carina live an unassuming life as a young married couple in Forest Hill Gardens, an affluent residence in Queens, New York. They were eventually discovered by the Guardian Starhawk by pure chance. A fierce duel ensued, with Korvac battling the Guardian on both the physical and astral plane. Korvac ultimately spared the life of his opponent, erasing any memory of the encounter. However, Iron Man is able to correctly deduce that their adversary must be near the site where Starhawk lost his memory, prompting the Avengers and the Guardians to visit the residence themselves. While Michael and Carina initially appear to be polite, gracious, hosts, Starhawk, due to the mental block placed on him from their previous encounter, is not able to see Korvac and asks his teammates why they are talking to thin air. Realizing that he has been discovered, Korvac attacks the heroes. Korvac was able to destroy most of his opponents, with Iron Man, Vision, and Thor putting up the strongest fights. But the battle attracted the attention of Galactus and the Elders, prompting Korvac to discard his power, apparently destroying himself in the process. In his final moments, he restored all those he killed to life. Carina, grief stricken by her husband's death, committed suicide with Thor's hammer Mjolnir.

It was later revealed that prior to the death of his physical body, Korvac released his cosmic power invisibly, which continued to exist as a disembodied presence. In this energy form, Korvac attacked Avengers Academy, but was repulsed by Hazmant's anti-matter powers. He ensured his own creation by possessing his father, Jordan, and transferring into his own infant body after Jordan fell in battle. During the Incursions, when Earth-1610 and Earth-616 collided with each other, Korvac, inexplicably back in his old cyborg body, attempted to stop the universal decay, but failed

In the aftermath of the Incursion, when the multiverse was restored to normal, the remains of Korvac's old cyborg body was found by the Enclave and refurbished into an android body dubbed Adam IV. While Adam IV was intended to help the Enclave bring about a better Earth, Korvac quickly regained his original identity and berated the Enclave as short-sighted for focusing solely on one planet. Seeking to reclaim his lost cosmic powers, Korvac assumed the identity of Dr. Fuller Tielhard, a scientist with an ambitious plan for collecting lighting and harnessing it as a renewable energy. Recalling how Iron Man's detective skills were what led to him being discovered last time, he recruits several of the Armored Avenger's old foes under the guise of "The Other." As Dr. Tielhard, he approaches Tony Stark at a high society mixer, bringing up his idea to create multiple "lightning collection farms" throughout the world. Though Stark doesn't like him, he agrees to fund the research. As "the Other" he directs a proxy war against Iron Man, with Unicorn, Controller, and Blizzard as his soldiers. Once the "lightning farms" come online, Korvac uses the energy to empower himself, upgrading his body to demigod status. He and his new disciples then set out to space to find the Tau II to restore himself to full power.

Korvac was, presumably, at one point a normal human with a genius level intellect but no extranormal abilities. He made extensive modifications to his cyborg body's existing flight and defensive capabilities, giving it the ability to synthesize multiple forms of energy, adapt to the attacks of his opponents, and teleport. Once imbued with the Power Cosmic, he displayed reality warping abilities similar to the Infinity Stones. In his "Adam IV" android body, he had superhuman strength and powerful electrical attacks.

Korvac's original cyborg body resembled a bald humanoid from the waist up. His right eye was blue, while his left eye was red. The lower half of his body was a square shaped floating computer console. After acquiring the Power Cosmic he was capable of assuming multiple forms: His human form was that of an athletic blond man of about 25 years of age, but his true form was that of a purple energy being - maintaining the basic shape of his human form - with a height of about 12 feet. His Adam IV android body consisted of a black graphene endoskeleton with a biological covering that vaguely resembles an older version of his previous human form.

"I'm afraid you've found the one you call the Enemy! And you can't imagine how very, very sad that makes me."
―Korvac takes no pleasure in destroying his opponents

"So let the war begin here! Now! And know, Avengers, that you've brought this upon yourselves! For your meddling heroics have destroyed the hopes of a universe, the dreams of a God! And for that, you shall pay!"
―Korvac preparing to throw down with the Avengers

"It's my nearly unlimited intellect that tells me this universe is a landfill that is conflict-laden and war-torn by the greedy. It tells me that this is a reality that, while filled with those proclaiming to be gods, is ultimately godless and lost. And ultimately it tells me that I am but mere steps away from becoming the god that it needs."
―Korvac explaining his motivations

"You suffer because you grasp only for survival. You can't see beyond that, which is why I have to do it for you. You're welcome. You're lucky you have me to care for you."
―Korvac can't take criticism any better than Thanos can

The alias Fuller Tielhard is derived from Buckminster Fuller and Pierre Tielhard. 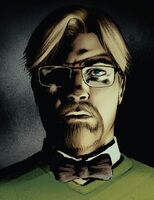 Add a photo to this gallery
Retrieved from "https://ironman.fandom.com/wiki/Michael_Korvac_(Earth-616)?oldid=90256"
Community content is available under CC-BY-SA unless otherwise noted.