Iron Man Wiki
Register
Don't have an account?
Sign In
Advertisement
in: Comics, Section In Progress, Comic Armors,
and 8 more

This page is based on Marvel Comics.

The Iron Man Armor Model 45 (Model XLV), also known as the Space Armor Mark III, was an armor that appeared in the Iron Man Comics of the Marvel Comics Universe, that was published by Marvel Comics.

It was created by Tony Stark, and it was also the armor he used while traveling with The Guardians of the Galaxy team. The advanced A.I. called P.E.P.P.E.R. was integrated into the suit to aid Tony in his missions.

The Secret Origin of Tony Stark

After Tony leaves Earth to join the Guardians of the Galaxy, he loses his way in one of the missions and finds himself on an alien-inhabited planet. 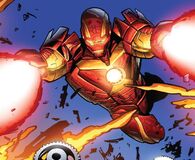