The modern-day Fury, initially a CIA agent, debuted a few months later in Fantastic Four #21 (Dec. 1963). In Strange Tales #135 (Aug. 1965) the character was transformed into a James Bond-like spy and leading agent of the fictional espionage agency S.H.I.E.L.D. The character makes frequent appearances in Marvel comic books as the head of S.H.I.E.L.D. and as an intermediary between the U.S. government or the United Nations and various superheroes. It is eventually revealed that Fury takes a special medication called the Infinity Formula that halted his aging and allows him to be active despite being nearly a century old. 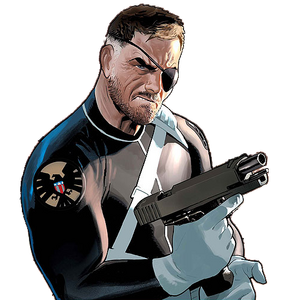 Retrieved from "https://ironman.fandom.com/wiki/Nick_Fury_(Earth-616)?oldid=81484"
Community content is available under CC-BY-SA unless otherwise noted.