Wears a Black Eye Patch in the Left Eye

"You need to keep both eyes, open!"
―(Captain America: The Winter Soldier) Nick Fury to Alexander Pierce about confirming their Retinal Scans.

Nick Fury, most commonly referred to as Director Nick Fury, is the Director of SHIELD, a High Level Agent, and a well known war hero. He appears in almost of the Marvel Cinematics Universe Franchise films, and is portrayed by actor Samuel L. Jackson.

Nick Fury is head of all SHIELD staff and agents, and was the one who created and founded the Avengers Initiative.

Nick Fury is an African-American, and has a black complexion. He is bald, and has only one eye which is his right eye. His left eye is covered by a black eye patch, and has a couple of scars from Goose the flerken, as seen in Captain Marvel. He gained that scar in a war.He wears a leather coat, and black clothes at most times. All of which has the SHIELD Logo, to display his rank as Director.

Nick is an intelligent person, and is often serious at times, due to him being the Director of S.H.I.E.L.D.

Nick Fury makes a cameo appearance in the film's post credits, when he is inside Tony's house and asks him that they talk about The Avengers Initiative.

Nick Fury is featured in the Avengers (2012). More information will be placed here soon.

Nick Fury does not make an appearance in this film.

Fury first appears in the barn of Barton's home, drawing in Tony for a meeting in which he tries to convince the Avengers not to give up despite their losses to Ultron. Fury informs them that they have a possible ally, a mysterious hacker that is keeping Ultron from getting the world's nuclear launch codes. Before leaving, Fury promises to do what he can to help despite his limited resources with the collapse of S.H.I.E.L.D. Its also revealed that while Maria Hill has been working for the Avengers since the collapse of S.H.I.E.L.D., she has also been working for Fury as a spy.

Fury reappears during the battle in Sokovia with a Hellicarrier, Rhodey and former S.H.I.E.L.D. agents to help, saying he pulled the Hellicarrier out of mothballs as well as some old friends. Fury uses the Hellicarrier to evacuate the residents of Sokovia from their now-floating city and personally destroys an Ultron drone when it crashes into the Hellicarrier's control room.

Following the battle, a new Avengers base is established in upstate New York and Fury is one of the people in charge of it. He comforts Romanaov with what little news he could find on the missing Bruce Banner.

Fury is among those disintegrated by Thanos. His last move is to contact Captain Marvel.

"The question is, what are you prepared to do?"
―(The Avengers) Nick Fury in The Avengers. 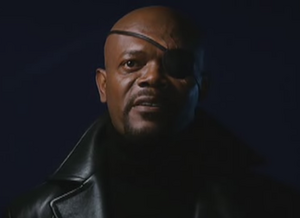 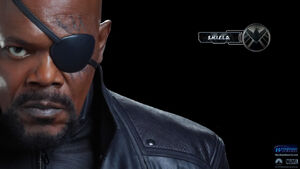 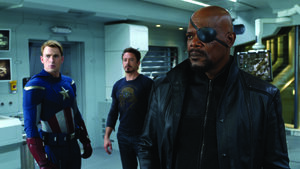 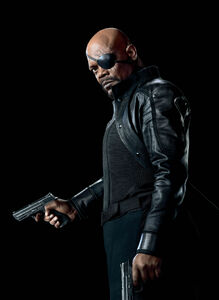 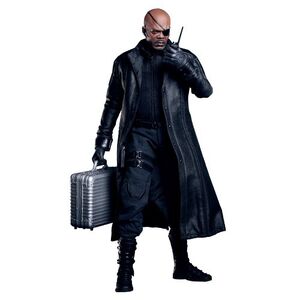 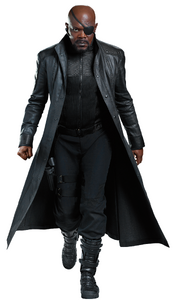 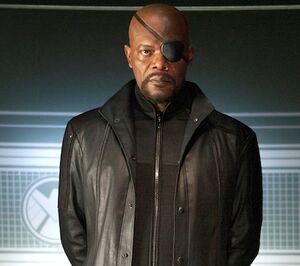 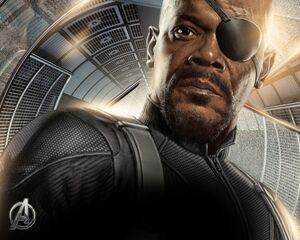 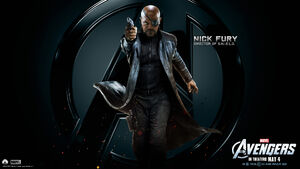 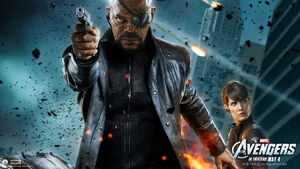 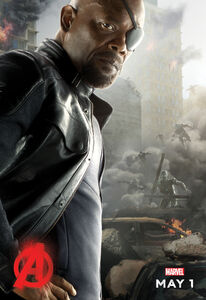 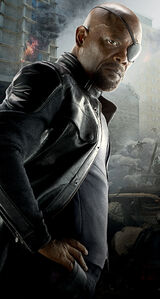 Retrieved from "https://ironman.fandom.com/wiki/Nick_Fury_(film)?oldid=89489"
Community content is available under CC-BY-SA unless otherwise noted.