"We're iron mongers. We make weapons. And what we do keeps the world from falling into chaos."
―(Iron Man) Obadiah to Tony in Iron Man.

Obadiah Stane (Obie for short) also known as the Iron Monger, was a character that appeared in the movie Iron Man, and is based off on the character of the same name in the comics.

He was formerly Tony Stark's friend, and was known for his betrayal, soon becoming his super-villain alt-ego, which is famously known as the Iron Monger.

He is portrayed by actor Jeff Bridges, and was set as the true main antagonist in the film. He is the former CEO of Stark Industries, and was known as a business partner to Tony, as well as a rival later on, although on some terms, Obadiah sometimes does not agree with Tony and they start their rivalry in industrial business.

Obadiah is a fairly tall American with white complexion. His appearance indicates his age is around Mid 50's to the early 60's. He has a beard, which is colored grey and white and is bald. Obadiah is Husky but slightly muscular in appearance.

Stane was a businessman who headed Stark Industries after the death of Tony Stark's father, Howard, and became the firm's second-in-command when the younger Stark came of age to take over Stark Industries. The Ten Rings soon found out who the target was and felt they hadn't been paid enough to kill Stark. They kept him alive to use for their own advantage by having him build them the Jericho missile. Following Stark's return from Afghanistan, Stane appeared to assist Stark's attempt to refocus the company away from arms manufacturing. While Tony was working on his suit Stane started to take over Stark Industries by sending weapons to both sides of the war.

36 hours earlier from the Military Convoy ambush in Afghanistan, Obadiah attends an Awarding Ceremony in Las Vegas, in honor of the famous billionaire and genius, Tony Stark. After Rhodey finished his speech about Tony, he calls him out to go onstage to receive his reward, but Tony doesn't appear at all.

Obadiah looks to Rhodey and tells him that Tony is not present, much to Rhodey's disappointment. Obadiah then steps up and goes on-stage to replace Tony and explain to the audience why Tony hasn't come.

After Ten Rings found the remnants of the prototype armor, Stane made a new deal with them to deliver the prototype to him, but ultimately betrayed the group and had them killed, stealing the Mark I armor. While working on building his own, bigger, more powerful suit he discovered that Tony's assistant Pepper Potts found out about his plans, so he stole Stark's arc reactor from his chest to power his new suit and left Stark for dead.

Final Battle with Stark and Death

After Potts discovered his plans, she and a few S.H.I.E.L.D. agents went to arrest him but they were no match for his new suit. As he was about to kill Potts, Stane discovered that Tony was alive and had come to save Potts. The two then fought in a final battle over the Stark Industries building. In the final moments of the battle, with Stark's power supply running low, Tony had Pepper Potts overload the prototype large-scale arc reactor in the complex. Stane was knocked unconscious by the blast, and he with his suit tumbled into the generator, causing an explosion that killed him and destroyed the armor. A S.H.I.E.L.D. agent working with Stark later covered up Stane's death by explaining he disappeared in a private plane while on vacation.

Obadiah appears in the interactive comics as a cameo wearing the Iron Monger Armor, and crushing Tony in his Mark III Armor. The scene was based out on the same one in the first Iron Man film.

"We're ironmongers! This is what we do for a living."
―(Iron Man) Obadiah to Tony about their jobs as businessmen. 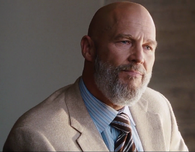