Many variants of the Iron Man armor have appeared over the years as one-shots, or in the background. 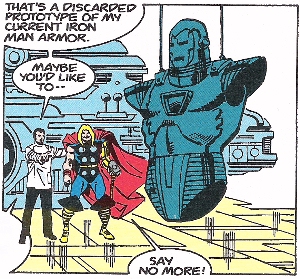 Tony Stark offered this discarded prototype of the Silver Armor to Thor for target practice. Its blue-grey color may indicate that it was a stealth suit, or it may simply have been unpainted. (Thor destroyed it with one throw of his hammer.) 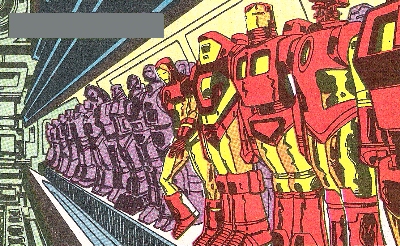 At least sixteen suits of armor are visible in this shot of Stark's armor archive. Many are unclear, but several are otherwise-unknown variants. Two of them appear to have dual unibeams on the chest. One appears to have a single eye. One (further toward the back) has an unusually elongated neck.

The armor stepping forward is the Neo-Classic Armor, under remote control. 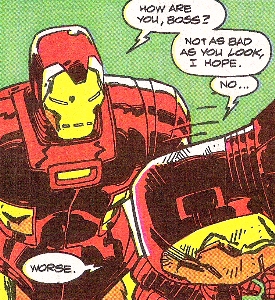 This variant of the Classic Armor was worn by Jim Rhodes during Armor Wars II, when he came to Stark's rescue. (Rhodes is at left, Stark is at right in the Neo-Classic Armor.) Stark explicitly states that it is an older armor, and it possesses both the older mouth configuration, and the external battery packs on the hips. However, it has a square unibeam, which had not been seen on any significant suit of armor up to that point. It also had a red stripe down the middle of the "belly", a feature of the Neo-Classic Armor not present on any of the classic suits. 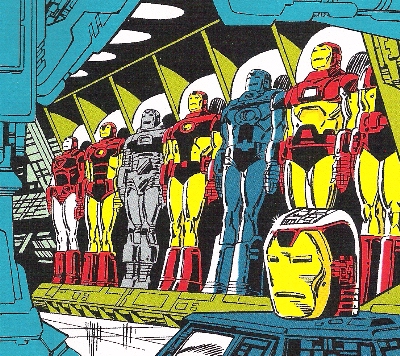 Another shot of Stark's armor archive, containing several variants. From left to right:

Retrieved from "https://ironman.fandom.com/wiki/References_to_Iron_Man_in_other_Culture?oldid=49091"
Community content is available under CC-BY-SA unless otherwise noted.