Robert Downey Jr. is a two-time Oscar nominee and Golden Globe winner, best known to fans as the handsome, charismatic and witty star of the Marvel Cinematic Universe's trilogy of Iron Man films, which are credited with breathing much-needed new life into Marvel's film projects and with launching the hugely profitable Marvel Cinematic Universe (MCU). He continued his role as Tony Stark/Iron Man in the Avengers series of films from Marvel Studios/Disney, and his Tony Stark character also appears in Marvel Studios' Captain America: Civil War and in the upcoming Spider-Man: Homecoming from Sony Pictures, with appearances yet to come in the MCU's Avengers: Infinity War and an as-yet-untitled fourth Avengers movie. Downey - known as "RDJ" to his worldwide fan base -- has also starred in famous blockbuster films such as Tropic Thunder and Due Date as well as in the Sherlock Holmes film series.

In 2008, Downey received international praise from critics and audiences for his performance in the title role of the blockbuster hit Iron Man under the direction of Jon Favreau. Bringing the Marvel Comics superhero to the big screen, "Iron Man" earned more than $585 million worldwide, making it one of the year's biggest hits. It is credited with launching the immensely successful Marvel Cinematic Universe, which now has expanded to include such iconic characters as Captain America, Black Widow, the Hulk, Thor, Dr. Strange and the Guardians of the Galaxy. "It's very safe to say," said Marvel Studios chief Kevin Feige, "that none of this would exist had 'Iron Man' not been the huge hit it was. The journey of Iron Man, and frankly the journey of the entire Marvel Cinematic Universe, all started with the journey of Tony Stark."

Downey proved he could headline another hit franchise as the title character in Guy Ritchie's 2009 holiday blockbuster Sherlock Holmes -- with Jude Law co-starring as his formidable Dr. John Watson -- for Warner Bros. The film broke the box office record for the largest Christmas weekend opening, and was followed by another Holmes adventure, also starring Downey and Law: Sherlock Holmes: A Game of Shadows, released in December 2011. The films, set in the Victorian era with lavish sets and costumes, adhered lovingly to the Sherlock Holmes canon while expanding the Holmes universe into a comedic action-adventure format, which resonated with audiences around the world. Together, the two "Sherlock Holmes" films have made more than half a billion dollars worldwide -- becoming the most-seen and most popular version of Sherlock Holmes ever put on the big screen -- and are credited with re-launching global interest in the 150+-year-old Sherlock Holmes franchise. Thanks to the RDJ Holmes movies, this newly ignited fascination put Sherlock Holmes squarely into the modern zeitgeist, resulting in two hit TV series and an avalanche of books and other media about the Great Detective -- all running concurrently with the movie series. Scripting and pre-production work is currently underway on a third "Sherlock Holmes" movie from Downey, Law and company, with Ritchie expected to helm once again.

Downey's other recent films include The Judge (2014), the first feature film produced by Team Downey, the company launched by Downey and his wife, producer Susan Downey. "The Judge" landed a supporting-actor Oscar nomination for Robert Duvall, a significant accomplishment for Downey's new production company. Downey also starred with Zach Galifianakis in the popular comedy Due Date, directed by Todd Phillips; in The Soloist opposite Jamie Foxx; and also in Charlie Bartlett; David Fincher's Zodiac alongside Jake Gyllenhaal and Mark Ruffalo; Richard Linklater's A Scanner Darkly with Keanu Reaves, Winona Ryder, and Woody Harrelson; and in Fur opposite Nicole Kidman. Downey's brilliant, wordy starring role in Kiss Kiss Bang Bang, a twisty, comedic spoof on film noir written and directed by Shane Black, is often cited by critics as an under-seen masterpiece.

Downey also shared in a SAG Award nomination as a member of the ensemble cast of George Clooney's Good Night, and Good Luck, and in a Special Jury Prize for the cast of A Guide to Recognizing Your Saints, presented at the 2006 Sundance Film Festival.

Earlier in his career, Downey starred in such films as Heart and Souls; Restoration with Sam Neill, Sir Ian McKellen and Meg Ryan; Only You with Marisa Tomei; Soapdish; Air America with Mel Gibson; Chances Are; True Believer; Johnny Be Good; a memorable and indelible turn as a doomed drug addict in Less Than Zero; The Pickup Artist; Back to School; and fan favorite Weird Science, among many others. The VERY young RDJ made his film debut at the age of five in Pound, under the direction of his father, the noted underground filmmaker Robert Downey Sr. As a child, he and his sister Allyson appeared in several of their father's experimental, absurdist underground movies, along with their mother, actress Elsie Downey.

On the small screen, Downey made his prime time debut in 2001 when he joined the cast of the Fox TV series Ally McBeal playing the role of attorney Larry Paul. He won the Golden Globe for best Performance by an Actor in a Supporting Role in a Series, Miniseries, or Motion Picture Made for Television, as well as the Screen Actors Guild Award for Outstanding Actor in a Series. In addition, Downey was nominated for an Emmy for Outstanding Supporting Actor in a Comedy Series. Downey was also a member of the Saturday Night Live ensemble comedy cast for the 1985-1986 season. 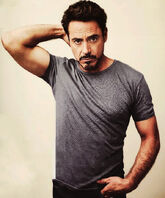 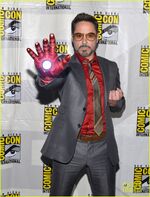 Retrieved from "https://ironman.fandom.com/wiki/Robert_Downey,_Jr.?oldid=90179"
Community content is available under CC-BY-SA unless otherwise noted.