In Iron Man 2, he was seen constantly reminding to convince and demand Tony Stark to hand over the Iron Man suit to the United States Government, as the suit was a weapon, and proved a great asset and liability to the U.S. Military, to which Tony refused to do, as he claims that it is his property, and that with it he has restored world peace, much to Stern's dismay.

In Captain America: The Winter Soldier, years after the events of the Stark Expo, Stern keeps his position as Senator but is involved in the plans of HYDRA to dominate the world.

Stern wore a tuxedo as part of his role as a Senator of the United States. He also wore the same clothing years later, when being involved with HYDRA's plans to dominate the world.

Stern had a fair complexion and whitish grey hair. Years after the Stark Expo incident, Stern's appearance greatly changed, having an elderly look on his face and more whiter hair than he had before.

Stern is an arrogant and persistent character, who truly despises Tony Stark. He is loyal to the U.S. Government, and is somewhat of a selfish senator but overly thinks of the peace for his country. Over time, he joined the secret organization of HYDRA, and got involved in their plans to dominate the world. With this, Stern no longer became a trusted person in the United States Government, and secretly worked in HYDRA's affairs.

Stern also has a liking for pins, as he stated when awarding Tony and Rhodey with their badges at the Awarding Ceremony, and when talking to Agent Sitwell outside the entrance of a Senate Building.

The Court Meeting With Stark

Senator Stern was part of a group of people in the government who despised Tony Stark and wanted to take his Iron Man Armor and claim it as their own. As part of the orders from the United States Military, and his role as a Senator to handle the situation, Stern called in a Court Meeting with Tony to discuss the ownership regarding his Iron Man Armor.

After the attack of Ivan Vanko in the Grand Monaco Racing Track, Stern reveals to the public that Tony's statement regarding the impossibility of the creation of another Iron Man Armor was wrong, and proves to the public that he was right all along.

In an interview, Stern implies his despise for Stark saying that "Mr. Stark thinks it's a toy! He says that it'll take 10-20 years before people can make them, but they do exist now!" With this statement, Stern was able to enhance the US Military to instead take Stark's armor by force, which would later be done by Tony's best friend, Lieutenant Colonel James Rhodes.

After the events at the Stark Expo, Stern is later hired by Nick Fury a few days later to award Tony and Rhodey for their heroism and actions done at the Expo, as requested by Tony as a favor to him being made a consultant for the Avengers Initiative.

During the ceremony, Stern gives a speech about the awarding, and gives the medals to the two heroes. He starts with Rhodey and thanks him for the heroic actions he had done to save the country. After, he awards Tony, to which he intentionally pricks him with the pin that he was awarding to him, and instead regards it as an accident. He converses with Tony shortly, and the three gentlemen have a picture together. With a hesitant, but "glad" Stern smiling for the picture together with Tony and Rhodey.

A Part of HYDRA

Years after the events of at the Stark Expo, Stern held his position as Senator in the United States Government. He secretly participated in the plans of HYDRA to take over the world.

After attending a conference in a Senate Building, Stern walked down the front stairways to attend to the media waiting outside for him. He finds Jasper Sitwell and the two have a short conversation about their plans, with Stern commenting about Sitwell's pin. Moments later, he whispers "Hail HYDRA!" to Sitwell's ear, to which both agree to their plans and involvement with HYDRA.

After the devastating event at the the SHIELD Headquarters of Triskelion, and the failure of HYDRA's plans to eliminate 20 Million people by the use of the new Project: Insight Helicarriers, Stern made an effort to hide his true intentions and flee. But not long after, his involvement with HYDRA was revealed to the public, and was immediately arrested by the police and imprisoned.

"**ck you Mr. Stark! **ck you, buddy!"
―(Iron Man) Stern to Tony Stark, after the latter won the cheer of the court audience.

"Oh, that's a nice pin you got there."
―(Captain America: The Winter Soldier) Stern to Agent Jasper Sitwell, commenting about his pin. 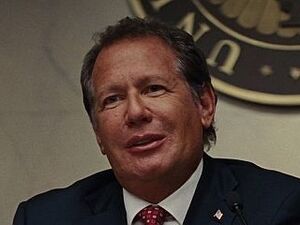