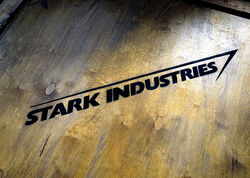 The company appears in stories published by Marvel Comics and exists in that company's shared universe, known as the Marvel Universe. It first appeared in Tales of Suspense #40 and was founded by Howard Stark, Tony's father. According to Forbes 25 largest fictional companies, it had an estimated sales of $20.3 billion.

In the film version of Iron Man, Stark Industries has a logo similar to that of Lockheed Martin and is listed on the New York Stock Exchange as SIA. During the press conference scene, Stark is seen entering a building that resembles the entrance to Lockheed Martin's Skunkworks facility.

Retrieved from "https://ironman.fandom.com/wiki/Stark_Industries?oldid=88693"
Community content is available under CC-BY-SA unless otherwise noted.