The mansion is Tony's private property. It has since been home to Tony Stark ever since he inherited his father's company and became a businessman. The house has been damaged once and finally destroyed in Iron Man 3.

The interior has a very modern minimalistic and high-tech design as well. The Interior sometimes changes through the course of the movies

Tony created the first Hall of Armors in his garage, and it has become a focal point of interest in the house.

Tony's Mansion has been improved since the last movie, the interior furniture has been changed and so is his hall of suits in his garage which in the previous iron man film there were only 4 suits in the hall and now there are 7 of them.

The house was also destroyed by the Mandarin's forces after Tony issues a threat against them. After the attack, nothing of the house is left, except for small parts of the base, and the Cellar Halls, also known as the basement, where the extension of the Hall of Armors is hidden. 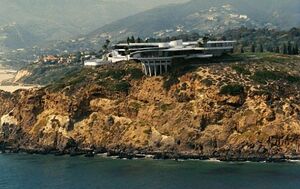 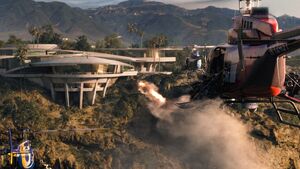