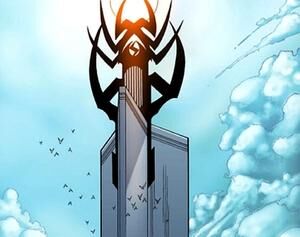 The Stark Tower Complex is a fictional high-rise building complex which appears in publications by Marvel Comics. Located in Midtown Manhattan, New York City, USA, the complex is named after its owner Tony Stark who is the alter ego of the superhero Iron Man.

The structure is composed of a 93-story Main Tower flanked by a 35-story South Building and 55-story North Building. Located at the top of the Main Tower was the Watchtower of the superhero, The Sentry, but it has been replaced by Heimdall's observatory. The Main Tower is informally known as Avengers Tower, as it serves as the headquarters of the superhero team, The Avengers, similar to the Avengers Mansion.

The Stark Tower Complex was built as a world-class financial and business facility to complement the Midtown Manhattan business district. The building was completed as a gleaming beacon of modern architecture after four years of excavation and construction. It is located in the vicinity of Manhattan's Columbus Circle approximately 10 blocks north of the Baxter Building, headquarters of the superhero team the Fantastic Four.

While initially intending to use the top three floors of the Main Tower as his state-of-the-art bachelor pad, Stark gave them over to the Avengers as their base of operations after their former base, Avengers Mansion, was destroyed. Longtime caretaker of the Avengers Mansion Edwin Jarvis was asked to resume his duties in the new location. Later, when the Sentry became a member of the Avengers, his long-hidden Watchtower appeared, integrating itself atop the Main Tower,[1] fully integrated into the building's existing architecture. Serving as both Sentry's headquarters and as the private residences of Robert Reynolds and his wife Lindy, the 20-story watchtower is operated and maintained by CLOC (Centrally Located Organic Computer), a near-sentient computer of Sentry's own design. The lower levels of the Main Tower, along with both the South and North Buildings, are largely occupied with Stark's subsidiaries and non-profit organizations.

After the passing of the Superhuman Registration Act (SRA), Iron Man was tapped to head the task force charged with enforcing the Act. Subsequently, Stark Tower became the base of operations of the task force. The controversy surrounding the SRA broke the Avengers team apart leaving Tony Stark to form a new team, the Mighty Avengers, who continue to occupy the Main Tower's higher levels. When the Tower became the headquarters of the SRA task force, it was assigned by the government a squad of Cape-Killer-guards with the call sign "Force Unit 9".[2][3]

During the events of World War Hulk, a violent battle between The Hulk and Iron Man nearly caused the collapse of Stark Tower.[4] The tower was rebuilt by Stark under his S.H.I.E.L.D. organization, making it S.H.I.E.L.D. property.

Stark Tower becomes the setting for a multi-issue conflict between humans and a murderous Skrull hunting them for sport. During the "Secret Invasion", many non-powered New York citizens, including Daily Bugle reporter Ben Urich, end up at Stark Tower. Unfortunately, it had become the hunting ground for a Skrull. He is shown killing most of the members of a design firm that had rented space in the building. Ben Urich regains control of the security shutters and the Skrull is tricked into throwing itself out a high window. It dies on impact.[5]

When Norman Osborn took over S.H.I.E.L.D., and renamed it H.A.M.M.E.R., he also took ownership of the tower.[6] After Osborn is removed from power, the tower is returned to Stark, and with the Sentry's death his watch tower disappeared from the rooftop, where it is replaced by Heimdall's observatory as sign of solidarity between Earth and Asgard.[7]

During the events of Fear Itself, Thing acquired a hammer. This transformed him into a being with Asgardian-like power called Angir: Breaker of Souls. Red Hulk started to fight him to protect the innocents, but got batted away by Thing. Red Hulk survived though and to try and remedy it, Thing tossed his hammer through Avengers Tower, bringing it down onto Red Hulk.[8]

Retrieved from "https://ironman.fandom.com/wiki/Stark_Tower_(Earth-616)?oldid=28263"
Community content is available under CC-BY-SA unless otherwise noted.