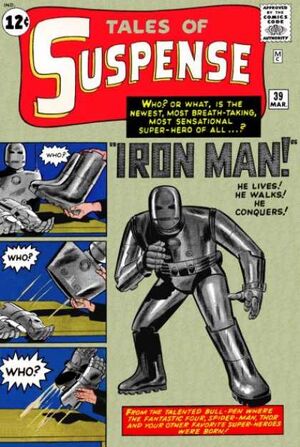 Tales of Suspense is a comic book series published by Marvel Comics from 1959-1968. Although it started out as a science fiction/horror anthology, the emerging popularity of superheroes led to such characters being featured regularly, eventually pushing out the non-superhero suspense stories. Iron Man first appeared in #39, and was a regular feature until the series ended. Captain America appeared in the Iron Man story in #58 and had his own feature from #59 until the series ended with #99, after which Tales of Suspense was retitled Captain America.

Captured by terrorists, Tony Stark together with physicist Ho Yinsen, build a suit of armor to aid Stark in his chest injury and to escape captivity from the terrorists.

Retrieved from "https://ironman.fandom.com/wiki/Tales_of_Suspense?oldid=89323"
Community content is available under CC-BY-SA unless otherwise noted.