The Teen Tony Armor, was an armor that appeared in the Iron Man Comics of the Marvel Comics Universe, that was published and created by Marvel Comics.

When it was revealed that Tony Stark was an agent of Kang the Conqueror (or so it was believed at the time) , a group of Avengers traveled to the past to retrieve Tony Stark from before he fell under the Conqueror's spell. A teenage Tony Stark was brought to the present to confront his older self; when the latter battled the Avengers in his Arctic fortress, the teen Tony seized one of the many armors and fought his adult self. He was, however, soon defeated by his more experienced opponent, who was wearing more powerful armor to boot.

Little is known about this armor, nor why Tony Stark designed it. 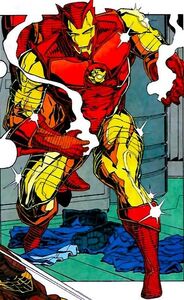 Retrieved from "https://ironman.fandom.com/wiki/Teen_Tony_Armor?oldid=64230"
Community content is available under CC-BY-SA unless otherwise noted.