The Tesla Roadster is a car model from the Tesla car brand. It is one of Tony Stark's cars, and can be seen in his large garage in the film, Iron Man.

Filming occurred in hangars that once belonged to Hughes Aircraft Company, founded by the not unlike Stark figure, Howard Robard Hughes Jr. In early 2007, Robert Downey Jr. heard about a Hughes like man, Elon Musk (CEO SpaceX and Tesla). SpaceX headquarters lay only 10 miles away and Downy ended up getting a tour from Musk, which blew his mind.

Having found some inspiration on the tour and in Elon Musk. Downey asked the director to place a Tesla Roadster in Tony Stark's workshop. This revolutionary car wasn't available to the public at the release date of the movie. 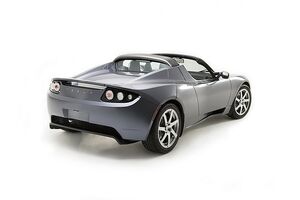 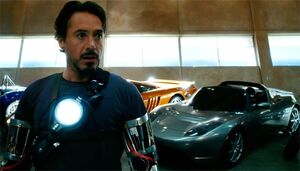 Retrieved from "https://ironman.fandom.com/wiki/Tesla_Roadster?oldid=88492"
Community content is available under CC-BY-SA unless otherwise noted.