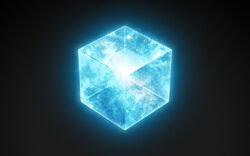 The Tesseract is revealed to be an Infinity Gem, along with the Aether.

Loki comes through a wormhole created by the Tesseract with the plan to use it to bring in a Chitauri army. He steals it and later uses a device attached to Stark Tower's Arc Reactor to power it and open a wormhole, surrounding it in an impenetrable forcefield.

During the following battle, Doctor Erik Selvig, who was freed from Loki's control when Tony Stark accidentally knocked him out when he tried to take out the Tesseract, realizes that he made it so that Loki's scepter could be used to shut down the Tesseract.

After Stark flew a nuclear missile through the Tesseract's wormhole and destroyed the Chitauri flagship, Natasha Romanoff used the scepter to close the wormhole. Later, Thor used the Tesseract to teleport himself and Loki back to Asgard.

Retrieved from "https://ironman.fandom.com/wiki/Tesseract?oldid=88493"
Community content is available under CC-BY-SA unless otherwise noted.