At least a thousand years

"You could not live with your own failure. And where did that bring you? Back to me. I thought by eliminating half of life, the other half would thrive, but you've shown me... that's impossible."
―Thanos in (Avengers: Endgame) To the Avengers.

Thanos is a character that first appears in the movie The Avengers, in the post-credits scene. Thanos is a super-villain based off the character of the same name in the comics.

Thanos appeared at the end of Avengers: Age of Ultron where he vowed to hunt for the Infinity Stones himself after all his previous minions had failed him.

Thanos is a Darwinist with a cynical view of existence, largely a result of witnessing his own civilization slowly destroy itself. Though not incapable of mercy or compassion, he largely sees others as tools, and has little patience for those who fail or cross him. Though he has the noble goal of sparing civilizations from fates similar to what befell his race, his extreme method of culling these civilizations, and refusing to consider more humane alternatives, makes him a dangerous extremist.

Thanos was born on the Saturnian moon of Titan, which was a thriving civilization centuries before Earth hosted intelligent life. Titan's population eventually exceeded its carrying capacity, causing a downward spiral of irreversible decline that eventually left Titan a dead world. Thanos survived to witness all of this, becoming the last of his kind.

Thanos eventually came into contact with a warrior race known as the Chitauri, as well as several feared mercenaries, which he formed an organization known as The Black Order. As his power base grew, he adopted a new mission, seeking out civilizations which were in danger of suffering a fate similar to his own, then wiping out 50% of it's population. Under his calculations, the surviving half would then be able to rebuild with an improved quality of life, and avoid the mistakes of old.

One of the first planets that the Black Order "cleansed" was Zen-Whoberi. While surveying the capital, Thanos found a child named Gamora hiding from his extermination squads and took pity on her, adopting her as his own daughter. Zen-Whoberi's quality of life improved in the years afterword, vindicating his decision.

Later, when he similarly cleansed the planet Luphom, Thanos also adopted a surviving child named Nebula. Gamora and Nebula were regularly pitted against each other in single combat and other feats of strength, as they were expected to be assassins for the Black Order once they were old enough. Gamora's sheer willpower and determination to survive would ensure that she always won those fights. For every failure against Gamora, Nebula would have an appendage replaced with a cybernetic enhancement.

In time, Thanos learned of six powerful artifacts called Infinity Stones, which, when paired together, granted their wielder near omnipotence. With the Stones, he saw an opportunity to bring balance to the entire galaxy.

The renegade Asgardian Loki Laufeyson approaches The Other, a spokesman for the Black Order, offering to procure the Space Stone, which had been hidden on Earth. Thanos agrees to lend Loki a detachment of Chitauri troops to assist him, but they are defeated by the Terran superhero team The Avengers. After witnessing Iron Man destroy the Chitauri troop transport with a nuclear missile, The Other concludes that a second campaign against Earth would be a suicidal gesture. However, Thanos grins, sensing a worthy opponent on the previously insignificant blue planet.

Guardians of the Galaxy

When the Kree Empire signs a treaty with the Xandarian Nova Empire, a hardline faction of the Kree military, led by Ronan the Accuser, went rogue and proceeded to launch numerous terrorist attacks against the Xandarians. Ronan eventually makes an arrangement with the Black Order, if Ronan will procure the Orb of Morag (containing the Power Stone), then Thanos will destroy Xandar. Thanos sends Gamora and Nebula with him as backup, but during the mission, Gamora betrays them, using the mission as an opportunity to defect. Ronan meets Thanos to discuss the betrayal of Gamora. However, Thanos is not interested and tells him to find the orb. When Ronan does find the orb, he dissolves his partnership with Thanos, figuring he can use the Power Stone to destroy Xandar himself, then go after Thanos. These amibitions proved moot, however, as Ronan fell in battle against the Xandarian Nova Corps and the newly assembled Guardians of the Galaxy.

After losing three members of the Black Order (Gamora and Nebula defecting, the Other being killed by Ronan) during his attempt to acquire the Infinity Stones and still turning up empty handed, a disappointed Thanos decides to take matters into his own hands and vows to hunt for and retrieve the stones himself. He takes an Infinity Gauntlet from an unknown vault and begins his quest.

Accompanied by the surviving Black Order members who were still loyal to him, Thanos attacked Xandar, retrieving the Power Stone. Soon after, he learns of the destruction of Asgard and a Sakaarian supercruiser, The Statesman, transporting the survivors to Earth. He pursues The Statesman in his flagship, Sanctuary II. After crippling The Statesman, Thanos and the Black Order board the ship, kill half the crew, capture Thor and Loki, and demand the Space Stone. Loki reveals that he does have it, but a surprise passenger, the Hulk, attacks Thanos before Loki can hand it over. Thanos overpowers the Hulk, but before he can deal a killing blow, the Asgardian Heimdall teleports the Hulk to Earth so he can warn his fellow Avengers of the coming threat. Loki offers to help the Black Order find the Time Stone on Earth, but Thanos refuses the offer, berating Loki for his previous failure before executing him. He then directs his agents to Earth while he heads to Knowhere to recover the Reality Stone.

The Guardians of the Galaxy, after rescuing Thor and taking him to Nidavellir (so he could forge a weapon capable of defeating Thanos), decide to follow Thanos to Knowhere, only to find that Thanos has already recovered the Reality Stone and set a trap for them. He captures Gamora, who knows the location of the Soul Stone. Gamora begs her boyfriend, Star-Lord, to shoot her before Thanos can interrogate her into revealing the stone's location. Star-Lord reluctantly aims for her head and pulls the trigger, but Thanos alters reality so that his gun fires bubbles and leaves with Gamora anyway.

Thanos takes Gamora to Sanctuary II, where he reveals that he has captured and imprisoned Nebula after she attempted to assassinate him. Seeing her sister tortured ultimately proves too much for Gamora, and she reveals that the Soul Stone is hidden on the planet Vormir.

On Vormir, Thanos and Gamora find the Soul Stone in a crypt guarded by the Red Skull. The Skull reveals that the Soul Stone can only be acquired by willingly sacrificing a loved one. Though the thought of losing Gamora leaves him grief stricken, Thanos has come too far to turn back... he hurls Gamora off a cliff, killing her.

With four Stones in hand, Thanos returns to Titan to await his general, Ebony Maw, returning from Earth with the Time Stone.

Unbeknownst to Thanos, while Maw did manage to capture the Time Stone's guardian, Dr. Stephen Strange, Iron Man and Spider-Man stowed away in his ship in an attempt to rescue him. Maw was subsequently killed when one of Iron Man's missiles knocked him into space, but since none of the heroes were able to reprogram the ship's computer, they had no choice but to allow it to continue to Titan. While there, the three heroes encountered the Guardians of the Galaxy, and they decide to team up to fight Thanos.

Once Thanos arrives on Titan, the heroes ambush him, hoping to subdue him long enough to remove the Gauntlet. However, Star-Lord learns of Gamora's death and flies into a rage, causing his teammates to break their concentration. Thanos gets his second wind, and proceeds to overpower most of the heroes, except Iron Man, who is able to hold his own due to his transformable Mark 50 armor. In time, however, Thanos gains the upper hand, managing to critically wound Iron Man. Thanos expresses respect for his fallen foe, as the two muse that in the six years since the Chitauri attack on New York, it seems they were destined to fight at some point. As Thanos prepares to finish off his nemesis, Dr. Strange offers to surrender the Time Stone in exchange for sparing Iron Man's life. Thanos agrees, then departs to Earth to retrieve the final stone.

The sixth Infinity Stone, the Mind Stone, is powering the android Avenger Vision, who is being offered asylum in the African nation of Wakanda. By the time Thanos arrives in Wakanda, his troops and remaining Black Order operatives have been defeated, but he is effortlessly able to kill Vision and extract the mind stone. Before Thanos can claim his victory with the fully assembled Infinity Gauntlet, he is attacked by Thor, now wielding a powerful battle axe called Stormbreaker. With Stormbreaker, Thor is able to deflect Thanos' energy based attacks, and gores him in the chest. Staring in disbelief at his mortal wound, Thanos uses his last ounce of strength to activate the Guantlet. Time freezes, and Thanos is briefly transported to a dreamscape within the Soul Stone where he is greeted by a child version of Gamora. He tells her that he achieved his victory, but it cost him everything. When normal time resumes, Thanos uses the Space Stone to escape as half of humanity begins to crumble into dust without warning. Seeing his mission finally complete, he enjoys a moment of peace by watching a sunset on a distant mountain world.

"I shall honor our agreement, Kree, if you bring me the Orb. But return to me again empty handed and I will bathe the star-ways with your blood."
―(Guardians of the Galaxy) Thanos reminding Ronan where he is on the pecking order.

"Fine. I'll do it myself!"
―(Avengers: Age of Ultron) Thanos taking matters into his own hands after Loki and Ronan fail to him bring him the Infinity Stones.

"I know what it's like to lose. To feel so desperately that you're right...yet to fail nonetheless. It's frightening. Turns the legs to jelly. I ask you; to what end? Dread it. Run from it. Destiny arrives all the same. And now, it's here. Or should I say...I am!"
―(Avengers: Infinity War)

"When we faced extinction I offered a solution... Just, passionate, fair to rich and poor alike. And they called me a madman. And what I predicted came to pass."
―(Avengers: Infinity War)

"It's a simple calculus. This universe is finite. Its resources finite. If life is left unchecked, life will cease to exist. It needs correcting."
―(Avengers: Infinity War) Thanos explaining his motivations.

"I ignored my destiny once. I cannot do that again. Even for you."
―(Avengers: Infinity War) Thanos realizing what he will have to sacrifice to achieve his goal.

"You have my respect, Stark. When I'm done, half of humanity will still be alive. I hope they remember you."
―(Avengers: Infinity War) Thanos acknowledging his respect for Iron Man during their duel on Titan. 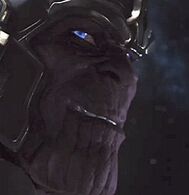 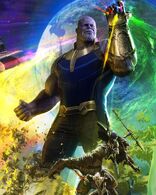 Retrieved from "https://ironman.fandom.com/wiki/Thanos_(Earth-199999)?oldid=89306"
Community content is available under CC-BY-SA unless otherwise noted.