Titanium Man is the name of three supervillains from Marvel Comics. They are traditionally foes of Iron Man.

The Titanium Men used green armor that was similar to that used by Iron Man and by their sometime compatriot, the Crimson Dynamo. Neither suit of armor was as sophisticated as that used by Tony Stark as Iron Man, but some of its weapons were deceptively powerful, and the first Titanium Man's physical strength seems to have been greater than that of Iron Man. He also boasted that his armor was made to last, not, like American technology, "with planned obsolescence" (although he had actually received several significant upgrades himself). The suit of armor increases the wearer's physical strength to superhuman levels, and is in fact stronger than Iron Man. It was also able to fly at supersonic speeds (it can even reach escape velocity), shoot concussive force blasts from the hands, project constrictive force "rings", fire an electromagnetically paralytic beam from the helmet, and was resistant to conventional artillery. Boris Bullski, the original Titanium Man, also possessed enhanced strength due to treatments given to him by the Soviet government to augment his physiology, making him grow into an 11-foot-tall giant. The Gremlin, being a dwarf who seldom exercised, was weaker than most people, but he possessed super-human intelligence, was capable of creating advanced devices and weapons, and was an accomplished genetic engineer.

Commissar Boris Bullski was born in Makeyevka, Ukrainian SSR, Soviet Union. According to the Black Widow, he was a KGB-member when he was a young man, and she was his combat instructor for a time. An ambitious official of the Communist Party of the Soviet Union, Commissar Bullski was demoted after displeasing his superiors.

While working as an administrator of a Siberian labor camp, he commissioned the imprisoned scientists at the camp to build a suit of armor using the lab of Anton Vanko, the creator of the original Crimson Dynamo armor. Seeking to win back the Party's favor, Bullski conceived the idea of winning a propaganda victory against the West by defeating the American superhero Iron Man. He assigned the scientists to create a powerful suit of titanium armor based on the Iron Man technology, though the inferior resources available to the scientists meant that the armor was twice the size of Iron Man's. Bullski received permission to issue his challenge and Iron Man accepted, defeating Titanium Man in a battle before a worldwide television audience.

Undaunted, Bullski prepared for a rematch by having the suit redesigned and

undergoing medical treatments that increased both his size and strength. Traveling to the United States, Bullski fought Iron Man in the skies above Washington, D.C. but was defeated. Withdrawing for retrieval by a Soviet submarine, he discovered that he had been abandoned on orders from Moscow. After working for the Vietnamese Communist scientist Half-Face (who increased his power yet again) for a while, he returned to the service of the Government of the Soviet Union, and was dispatched to the United States to retrieve the third Crimson Dynamo. Finding the Dynamo at Cord Industries, a three-way battle between Titanium Man, Crimson Dynamo, and Iron Man began, during which Titanium Man killed Janice Cord with an electronic beam. Enraged, Iron Man soundly defeated Titanium Man, and left him in the murky depths of the Hudson River.

After the defeat, the two disgraced Soviet agents fled to Communist-controlled Vietnam, where they joined with Radioactive Man to form the Titanic Three. Though Bullski enjoyed working as a sanctioned agent once again, he longed to return to the Soviet Union, and devised a new plan to win his superiors' favor. Adopting the alias of "The Other," he dispatched another former Soviet agent, the Unicorn, to destroy Iron Man. When the Unicorn failed, the Titanium Man went to destroy Iron Man himself, only to fail once more.

Despite his failures, Bullski was in favor with the Soviet government once more, and returned to the United States on a mission for the KGB. By threatening the parents of a Soviet defector named Sergei, he forced the man to design technologically advanced armored suits that could be transformed into small card-like objects. Posing as "the Commander," Bullski used the suits to equip members of the Green Liberation Front (G.L.F.), an organization of disaffected Vietnam War veterans who felt ignored by their country. With the suits, the G.L.F. robbed a New York City bank and the Federal Reserve Bank of New York; though the members believed that they were simply acting as thieves, Bullski used the robberies as a cover for implanting a computer virus that would destroy American financial records, causing chaos in the economy of the United States. Beta Ray Bill and Sif opposed the G.L.F. and the Commander, but when Sergei discovered that his parents were dead he exposed Bullski's true identity and the angry members of the G.L.F. turned on the Titanium Man. Teleporting away, he rematerialized in card form, which Sergei then simply tore and threw away.

Some time later, the new Crimson Dynamo was sent to the United States by the Soviet government to retrieve the remnants for reintegration. The G.L.F. discovered the Crimson Dynamo's mission and attacked him, forcing him to seek assistance by reactivating the Titanium Man, who due to the incomplete nature of his reassembly was still missing body parts. Enraged, Bullski slaughtered the members of the G.L.F., and was only stopped when the Dynamo lured him over the Atlantic Ocean and returned him to card form. Bullski was later restored and continued to serve as Titanium Man, as a member of the Soviet Super-Soldiers and later Remont-4, but felt increasingly despondent as the Soviet Union declined. After an attack on a Stark Enterprises factory in Russia, he was believed killed while battling Tony Stark, who was wearing Crimson Dynamo armor that was being controlled by Colonel General Valentin Shatalov, a former friend of Bullski.

The second Titanium Man was the mutant formerly known as the Gremlin, and served with the Soviet-era superhero group, the Soviet Super-Soldiers. The Gremlin was killed in combat with Iron Man during the first "Armor Wars" when the titanium in the suit exceeded its combustible temperature.

The identity of the third (?) Titanium Man is the subject of some controversy. The first time this figure manifested itself, he attacked Stark Enterprises and Iron Man directly, apparently under orders of Stark-Fujikawa (possibly as a mercenary). While he was shown to cherish Soviet paraphernalia and newspaper clippings featuring Boris Bullski, his identity was not firmly established. Some time later, during a space mission to destroy an enormous asteroid that threatened to impact on Earth, a Titanium Man, claiming to be this same person, stated his name was Andy Stockwell, and had never had a connection with the USSR. However, moments later it was revealed he was actually a member of "The Hammer", an international network of communist sleeper cells who wanted to destroy the United States. He was lost in space, but being not too far away from Earth, may have returned under his own power. In any case, a Titanium Man was contacted and hired, ostensibly through the Hammer again, to do a mercenary job for, of all people, Tony Stark in his effort to stop the superhuman registration bill. It has been strongly suggested (outside of comics´ pages) that the third Titanium Man was indeed Boris Bullski, but against this speaks his apparent willingness to work for Tony Stark - under any set of circumstances - rather than kill him. His face was revealed to look nothing like Bullski's, and it is possible that there are multiple Titanium Men, or at least several people filling the role in turn.

The fourth (?) Titanium Man was a Kree Warlord named At-Lass, more commonly known as Captain Atlas. A soldier in the Kree Empire, Atlas grows disillusioned with the Supreme Intelligence during the war with the Shi'ar Empire and goes rogue. Seeking to build his own power base, he plots to steal several of Iron Man's remote controlled armors, intending to repurpose into an armor of robot drones. He hires Spymaster to carry out the heist, and they agree to wait until most of the Avengers are in space battling Thanos to ensure lighter security. Spymaster hires Blizzard, Whirlwind, Firebrand, Whiplash, and Unicorn as muscle for the heist, and Atlas infiltrates the team himself as Titanium Man. After successfully stealing the armors, Titanium Man reveals his identity as Atlas. While Spymaster willingly collaborates with Atlas, the other supervillains refuse to be pawns of the alien despot, and quickly side with Iron Man when he returns to recover his stolen property. Unicorn, eager to destroy the impostor who impersonated his "friend" Boris, vaporized Atlas with his Uni-Beam, killing him.

The second Titanium Man was seen as a member of the Soviet Super-Soldiers.

"I am real, puny fools. I am power unparalleled. I am...the Titanium Man. If you cannot accept the uselessness of your weapons, then feel the overwhelming onslaught I direct at any who delay me in the task I must perform, and BELIEVE!"
―Boris hamming it up

"Fool! Even a god is no match for the power of the Titanium Man!"
―Titanium Man no-sells Thor 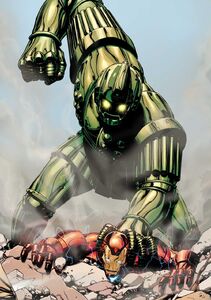 Retrieved from "https://ironman.fandom.com/wiki/Titanium_Man?oldid=89982"
Community content is available under CC-BY-SA unless otherwise noted.