"That's what I've been trying to tell you all along. I'm Iron Man!"
―(Tales of Suspense Part 2) Tony Stark revealing his identity to Gene Khan.

Anthony Edward Stark, or also known by his nickname as "Tony", is one of the main characters and protagonists, that appears in the TV series Iron Man: Armored Adventures. He is voiced by actor Adrian Petriw.

Tony is a white American male teenager. He usually wears a red shirt and blue plants over the course of the series, and has an RT Node in his chest, with light blue vein-like things surrounding it. He has black hair, blue eyes and wears a watch on his right arm.

Tony is a kind person and usually puts his father, his friends and his company before anything else.

Anthony Edward Stark was born to parents Howard and Maria Stark. As he grew up, Tony was home-schooled and taught by his father. Through his father's teachings, Tony became a child prodigy and a genius. Over the course of his childhood and early teenage life, Anthony Stark was the brains behind the projects and devices created by Stark International. He worked together with his father to create technology and products that would help the people as well as the world.

i think this is the test 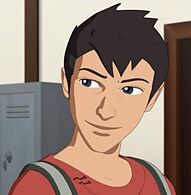 Retrieved from "https://ironman.fandom.com/wiki/Tony_Stark_(IMAA)?oldid=89465"
Community content is available under CC-BY-SA unless otherwise noted.