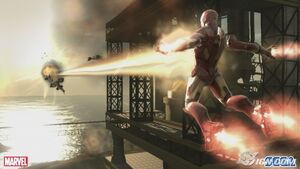 The Unibeam is a secondary repulsion blast that comes out of Iron Man's chest R.T. It has to be used wisely, as if it is used excessively, it can rapidly drain the suit's power. It has also been shown that it can be used as a search light. First used by the Mark II armor, the Unibeam has to be charged, and therefore has been used rarely.

The suit's entire power can be diverted into the Unibeam to perform a blast.

It should only be used in complicated times. It generally uses 20-30 percent of the suit's battery power. In the Mark VII, it was used many times without consuming too much power, due to the Arc Reactor built in Iron Man 2.

The armor's energy can be redirected into the Unibeam to shoot a powerful blast that can repel or obliterate many objects. The energy burst takes the form of whatever shape Tony chose for the cover of the Arc Reactor, such as a circle, inverted pyramid or hexagon.

Tony designed the Unibeam while refining his Iron Man armor. To project energy out from his reactor, he designed a powerful weapon and projectile unit, which gave birth to the Unibeam. It was first equipped and tested on the Mark II. Tony uses it to rescue a family while battling Iron Monger, though it only knocks Iron Monger out of the fight for a moment. The Unibeam is not used again during that fight due to the immense drain it caused on the already power-depleted suit.

While drunk in the Mark IV, Stark casually destroyed a watermelon with the Unibeam while showing off for his party guests.

During Tony's first encounter with Thor, the power capacity of the Mark VI was temporarily increased to 475%, allowing Stark to blast the Asgardian with a combination of both repulsors and his Unibeam.

The Unibeam was powered by the new Vibranium Arc Reactor Mark II. During the battle on Air Force One, Tony killed Eric Savin by blasting him with the Mark 42's Unibeam through the chest at point-blank range. The Unibeam was powerful enough to completely overwhelm Savin's Extremis powers, disintegrating his chest and vital organs and still travelling for several feet afterwards.

During the final battle, Tony used the Unibeam on the Mark 45 in conjunction with Thor's lightening to overload Ultron's doomsday machine.

While fighting Steve Rogers and Bucky Barnes, the latter forced Tony against a wall and attempted to remove the main arc reactor of the Mark 46 with his metallic arm. Tony unleashed the Unibeam blasting Barnes several feet away and disintegrating the artificial limb.

Retrieved from "https://ironman.fandom.com/wiki/Unibeam_(film)?oldid=88689"
Community content is available under CC-BY-SA unless otherwise noted.