Resurrected (By S.W.O.R.D. and Wandas ability's)


8 (By WandaVision, Not counting Death)

"I am not Ultron. I am not J.A.R.V.I.S.... I am something much more complicated."
―(Avengers: Age of Ultron) Vision about himself to the Avengers.

The Vision is an android created by Ultron as part of his original plan to create a more powerful version of himself. He is a character that appears in the Avengers sequel, the Avengers: Age of Ultron. He was voiced by Paul Bettany, the same actor who voiced J.A.R.V.I.S. in the Iron Man film franchise.

Vision's primary colors are purple, dark green and gold. He has a red surface plating with gold outlines across his body, and shades of dark green in various areas. Vision also has a golden cape.

After Ultron obtains the Chitauri Scepter from the Avengers, and the Vibranium supply from Ulysees Klaue, he travels to Seoul, South Korea for his plan to create a new, and more powerful version of himself. Ultron mind controls' Stark's friend Dr. Helen Cho with the scepter, and forces her to use her synthetic tissue technology, combined with the Vibranium and the scepter's gem to create the perfect body for him.

Overtime, Helen's work on fusing the Vibranium and the synthetic tissue goes exceedingly well, and Ultron's new body is nearly ready for his use. After the body's construction was finished, Ultron uploads his memory into his new body. The upload does not finish as the Avengers arrive at the base, and Ultron is prompted to leave.

Tony uploads Jarvis into the body, who is revealed to have survived, however Thor makes an attempt to stop him. In doing so, he forces thousands of volts of electricity to surge through the body, animating it as Vision instead of shutting it down.

Vision appears in the game as a Spec Ops Hero. After Hank Pym lost control of Ultron, Ultron takes control of Vision. S.H.I.E.L.D later retakes possession of him and converts him back to good. 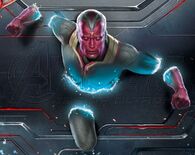 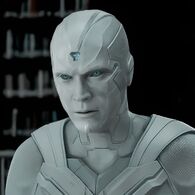