The War Machine Armor, also known as the Variable Threat Response Battlesuit, was an armor that was created by the Tony Stark. Suit's base (Mark II) also served as integrated Arc reactor prototype before being seized by Lt. Col. James Rodes and subsequently being modified and upgraded by the U.S. Air Force in collaboration with Hammer Advanced Weapon Systems which debuted in the movie, Iron Man 2.

It made its debut in the movie when it was presented at the Stark Expo, piloted by Lieutenant Colonel James Rhodes, along U.S. Armed Forces branch-based unmanned unit prototypes (Hammer Drones).

The War Machine Armor has a metallic and silver color plating on its overall armor design. Since it was formerly the Mark II, which was modified with additional armor plates and ballistic weaponry, it retains all the signature features of the Iron Man armor, and is only bulkier and heavier in appearance.

The armor is equipped with a M134 Mini-gun attached to the left, and two large shoulder packs which carry powerful weapons

This armor has all the capabilities of previous Iron Man armors.

The War machine armor featured M134 7.62x51mm NATO caliber mini-gun with auto-targeting feature. Mounted on its left shoulder in most of the comics, but in the Iron Man 2 film however, it was mounted on the right shoulder.

Being a modified Mark II platform, War Machine Mark I features repulsor based flight system, due high-power of the flight system the suit can achieve super-sonic speeds despite having increased weight and aerodynamic drag.

A high-power bunker buster type micro-missile. It was said the missile is capable of busting bunker below bunker that has been destroyed. The missile was used in an attempt to destroy Whiplash only for it to bounce off the Whiplash's armor and electronics rendered useless by water.

The War Machine Armor has a regular circular-shaped Unibeam, that is able to fire powerful plasma blasts. Its RT color is red, indicating that it was heavily customized, together with its systems, to match military strength and energy-like power, and unmatchable strength.

The War machine armor had M134 7.62x51mm NATO caliber mini-gun with auto-targeting feature. Mounted on its left shoulder in most of the comics, but in the Iron Man 2 film however, it was mounted on the right shoulder.

During the night at Tony's Birthday Party, he goes drunk while wearing the Mark IV Iron Man armor, which enrages his best friend Rhodey, who stood up for him against the government regarding his property of the Iron Man armor.

When Pepper fails to stop Tony in being reckless from his drunken state, Rhodey, knowing that there was no other choice, heads down to the garage and dons the Mark II from the Hall of Armors. Tony and Rhodey battle to a stalemate when they fire their repulsors at each other, creating a massive explosion. Disgusted, Rhodey delivers the Mark II to the military and it is rebuilt by Hammer Industries into the War Machine.

The War Machine, with Rhodey still as its pilot, is unveiled at the Stark Expo along with the Hammer Drones. Tony arrives in the new Mark VI armor and tries to warn Rhodey, but he is uninterested until Vanko takes control of the drones and the War Machine armor and uses them to attack. War Machine and Iron Man battle each other while Tony tries to stop the drones at the same time. Eventually, Natasha Romanoff restored control of War Machine to Rhodey and together he and Tony took out the remaining Hammer Drones. They then had to face Vanko himself in a powerful suit of armor and were unable to defeat him even working together. Remembering their earlier fight, Tony has Rhodey fire the War Machine's repulsor at the Mark VI at the same time Tony fires at him, causing an explosion in front of Vanko, destroying his suit and defeating him. By the end of the battle, the armor had lost its minigun. Vanko self-destructs himself and his drones, but both Iron Man and War Machine escape. Rhodey later finds Tony and Pepper kissing and Tony demands the return of the armor but Rhodey refuses, citing that his car was destroyed in the battle. Rhodey then flies off in War Machine.

Following Iron Man 2, Tony retrieves the armor from Rhodes and reverts it back into the Mark II suit. However, he gives Rhodes the new War Machine Mark II suit instead.

Retelling the story of Iron Man 2, the War Machine Mark I appears in the scene where Rhodey uses it to fight alongside Tony Stark against the Hammer Drones. 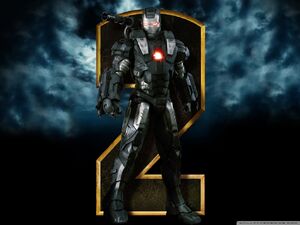 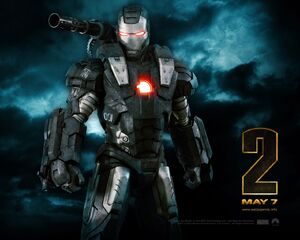 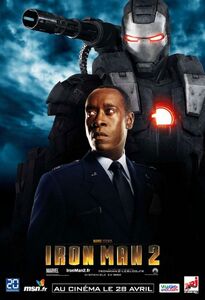 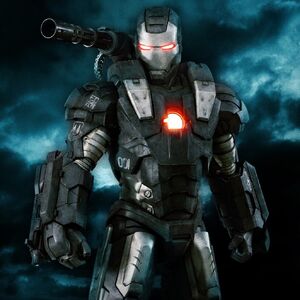 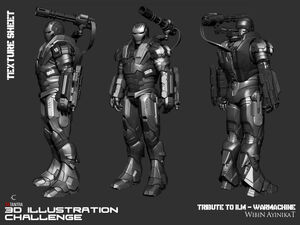 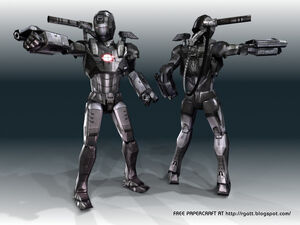 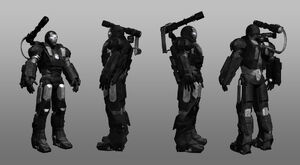 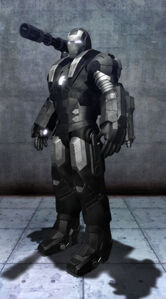 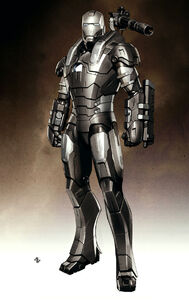 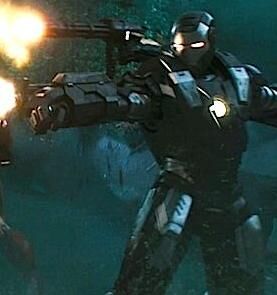 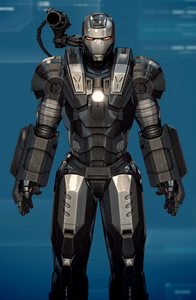 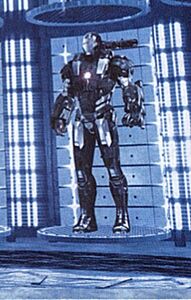 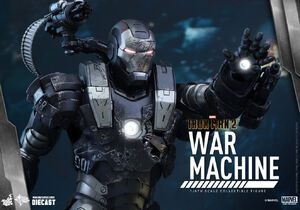 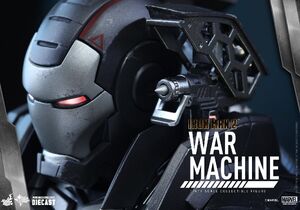 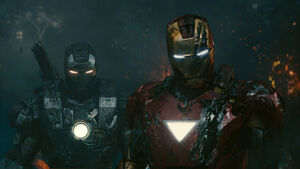 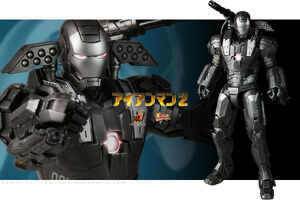 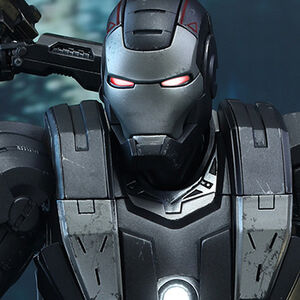 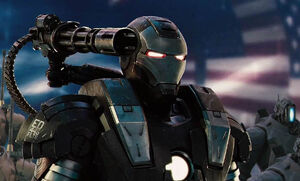 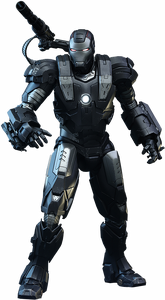 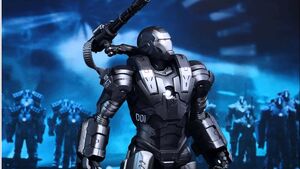 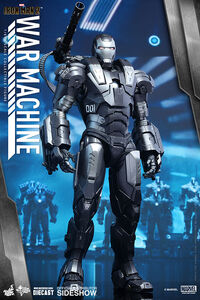 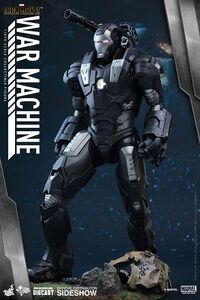 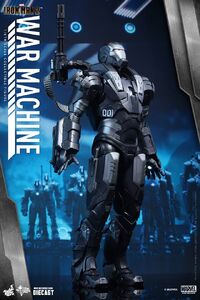 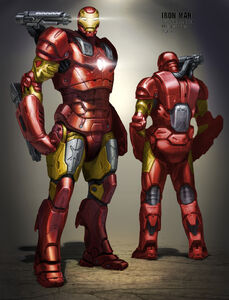 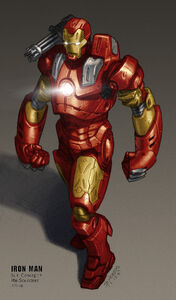 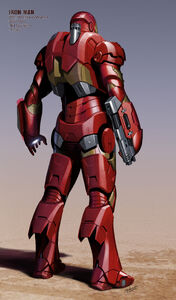 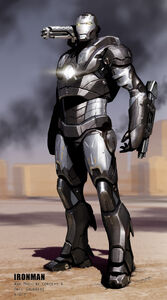 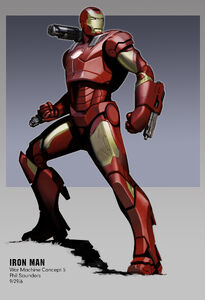 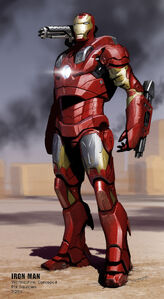