THE FOLLOWING BELOW CONTAINS CONTENT FROM RECENTLY RELEASED MEDIA.
IF YOU HAVE NOT WATCHED THE MOVIE, WE RECOMMEND YOU LEAVE THE PAGE.
IF YOU WISH TO VIEW THE PAGE HOWEVER, PROCEED AT YOUR OWN RISK.

This armor has all of the capabilities of its predecessor.

This armor's powerful iconic weapons can be used for a variety of functions including flight, heating, cutting, or incapacitating.

Micro-Cannons stored on upper and lower part of both of the armor gauntlets. Fires caseless rounds. Due ammunition's nature and internal feeding mechanism the suit only has to eject spent propellant cases (stored inside the gauntlets).

A non-lethal baton type weapon used to paralyze the opponent with concussive force strikes. Stored in back right side of the suit.

The armor was created sometime after the Battle of Sokovia and before the events of the Sokovia Accords.

During the time of the Sokovia accords, the War Machine Armor Mark III was Rhodes' current armor. He donned it to intervene Black Panther's chase with Captain America for the Winter Soldier.

Later on, Rhodes used the armor in the battle against Roger's team. After the battle, he was one of the few active members left and chased down Rogers' quinjet. Falcon was tailing him and requested Vision for backup. Vision fired a beam from the mindstone but missed his intended target, Wilson. Instead, the beam directly hit the armor's reactor, disabling it. Rhodes fell to the ground, as neither Stark nor Wilson was able to catch him. His fall knocked him out and left him paralyzed.

The War Machine Mark III Armor is an armor, appears in the game. Although, if you're finding this War Machine armor, it is not available in the game, but other than that, this character is inside the Civil War DLC, alongside with the Iron Man Mark 46. This DLC can be purchased to a minimum 1.35$ USD.

The War Machine Mark III Armor is also a playable armor in the game. It seems after completing the Level 19 - On Board The Sword in Story Mode. You may need to do the Free Play mode, to do this, equip only one character that can go to every ventilation systems, there you see that character card(?) over there, there, you can see that ventilation system which it connects to over there. There you have unlocked the War Machine Mark III Armor. 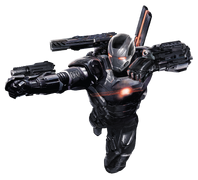 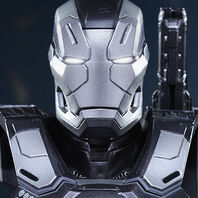 Sonic Cannon in use
Add a photo to this gallery

Retrieved from "https://ironman.fandom.com/wiki/War_Machine_Armor_Mark_III?oldid=89473"
Community content is available under CC-BY-SA unless otherwise noted.