In the original script the armor was intended for battle in Wakanda after War Machine Mark IV gotten destroyed in Edinburgh. After the Mark V suit was cut from the movie the backpack unit was reused for Mark IV in the final version of Infinity War.[1]

Early in film's development War Machine Mark V was inteded to be final War Machine armor desgined for use in the final battle which was intended to be set in space alongside Iron Man Mark L. Later in development location was switched to Avengers HQ and with Phil Saunders' departure to other projects, two new suits were designed: War Machine Mark VI (concept was made post-production) and Iron Patriot Mark II. [1] 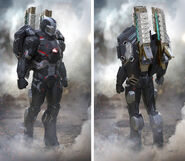 Alternate (early development) space based armor design
Add a photo to this gallery
Retrieved from "https://ironman.fandom.com/wiki/War_Machine_Armor_Mark_V?oldid=78577"
Community content is available under CC-BY-SA unless otherwise noted.